Patricia Arquette Calls Trump An "Illegitimate President," Wishes He Gets Coronavirus Or Resigns

The Hollywood actor also called on the government to make masks mandatory to contain the spead of the virus. 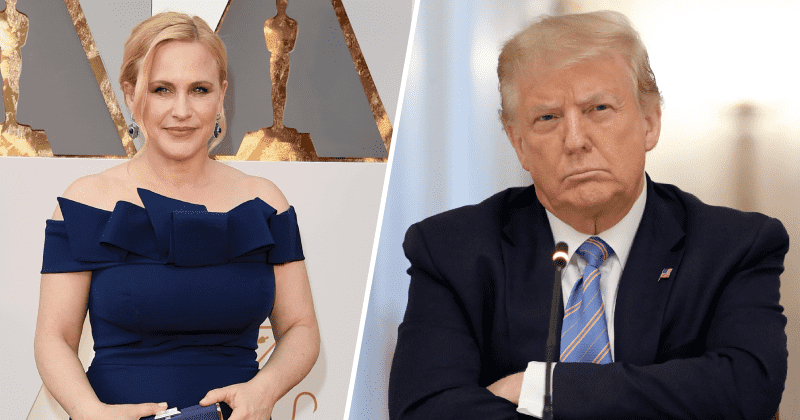 Hollywood actor Patricia Arquette labeled Donald Trump an illegitimate President and said she hoped Trump would get coronavirus. She also hit out at Trump's handling of the coronavirus that has killed more than 133,000 Americans. She tweeted: Trump's ass-backward approach is going to keep America knee-deep in Coronavirus deaths long after Europe is up and running. Our economy is going to stay in the toilet for far longer. He is a dangerous negligent loser. She also accused House Minority Leader Kevin McCarthy, a Republican, of turning America into a "cheapo Russian colony." Arquette was responding to Kevin McCarthy's tweet accusing Democrats of not loving their country.

Reminder — Donald Trump is not the legitimate President of the United States. He never has been. He never will be, tweeted the Oscar-winning actress. Arquette also said she would welcome the news if Trump had contracted the virus or resigned from office. She urged the government to make masks mandatory to prevent a full-blown disaster as far as coronavirus response is concerned. I think the government and insurance companies need to say If you get Coronavirus and were found not to wear your mask in public then YOU PAY YOUR MEDICAL BILLS, tweeted Arquette.

This young girls death is thanks to Fox News and Trump and Hannity. This girl is the person Trump shot in the head on 5th avenue. https://t.co/orAeYCReqM

In May, Arquette said the coronavirus death count "could have been avoided had we had a real leader who cared about the American people and not just profit." She pinned the blame on the Republican party and said their legacy would be the deaths of innocent people. Arquette has backed Democrats on previous occasions and said another four years of Donald Trump would lead to "mass extinction and the destruction of our planet."

Arquette was also heavily critical of Trump in her Golden Globes acceptance speech in January. "I'm so grateful to be here and celebrate this but also I know tonight, January 5, 2020, we're not going to look back on this night ... in the history books we will see a country on the brink of war," said Arquette, reported CNN. "The United States of America, a President tweeting out a threat of 52 bombs including cultural sites. Young people risking their lives traveling across the world. People not knowing if bombs are going to drop on their kids' heads and the continent of Australia on fire." The actor made the speech as tensions between Iran and America escalated over the assassination of Iranian general Qasem Soleimani in Baghdad.

RUSSIA LAUNDERS MONEY THROUGH TRUMP AND JARED. WAKE UP!! U.S soldiers heads are on the line here. https://t.co/wE0WkNRNpD

"[President Trump] doesn't even care how many people die."

Actor Robert De Niro also slammed Trump over his poor response to the pandemic. The Taxi Driver actor said Trump is only focused on getting re-elected and "doesn't care" how many people die from the pandemic. "It's appalling, it's appalling. He wants to be re-elected, he doesn't even care how many people die," said De Niro while discussing the pandemic with host Emily Maitlis on Newsnight. When she pointed out that the President's fanbase continues to back Trump, De Niro said Trump didn't care about them either. "No, he doesn't care for those people. And the people who he pretends to care about are the people he has the most disdain for because he could care less about them. They might like to tell themselves or delude themselves, but he doesn't care about them," he added.