trending celebrity people lifestyle news animals
Pat Boone Grieves Death Of Shirley Boone, His Wife Of 65 Years: "She Was So Easy To Love"

Pat Boone Grieves Death Of Shirley Boone, His Wife Of 65 Years: "She Was So Easy To Love"

Legendary singer Pat Boone fell in love with Shirley when they were only 16 years old. The two spent a lifetime devoted to each other, until death finally took her away from him on Friday morning. 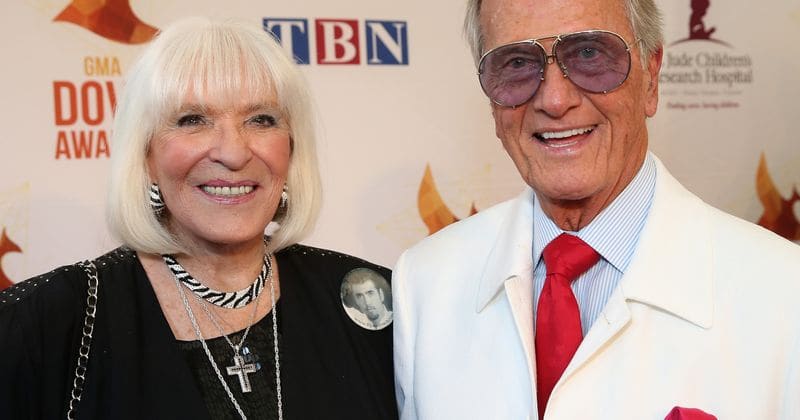 On Friday morning, the legendary 1950s singer, Pat Boone lost the love of his life. Pat and his wife Shirley were high school sweethearts, and pretty much grew up and grew old together, sharing a wonderful marriage that lasted 65 years. For Pat, the void that Shirley has left behind is going to be a hard one to fill. Shirley Boone led a rich and full life before leaving this world to meet her maker at 84. She spent her final moments in the comfort of her home, made complete by the company of those who loved her most. Pat and their four daughters, Cherry, Lindy, Debby, and Laury surrounded her as her gentle soul peacefully left her body to the sounds of their voices singing her favorite hymns. It was a fitting farewell for a woman who devoted her life to her family and faith. Shirley had contracted vasculitis less than a year ago and related complications are what stole her away from this world.

In a truly moving description of how he is coping with the loss of his long-time love, Pat, 84, told People, "We lived a wonderful, blessed life together for 65 years. I’ve parted with my better half for a little while… but we don’t die, we just move on to another place, and today was moving day," whilst adding, "She’s changed her address is all and moved to a different mansion that I expect to join her in one day." "I’m very confident of that," Pat bravely stated. "That took the sting out of what happened today because we know we’re gonna be together again and have a whole new beginning."

We can only pretend to understand what it must be like to lose the person who has been the center of your universe for 65 years. The two fell in love when they were only 16 years old. "We were very much in love," Pat shared. Shirley was the daughter of country singing legend, Red Foley. When she was 19, her family planned to move away. That is when Pat decided it was time to ask for her hand and make her his forever. He mustered up the courage to ask Foley for his permission and blessings.

You and I (single) Pat Boone’s love song You and I is always a hit when performed in concert. In this touching recording Pat’s tender lyrics express his deep love for and devotion to his wife Shirley – the love of his life for more than 63 years. #patboone goldlabelartists.com

Foley, cherished his little girl and his heart broke a little at the thought of not having her with him. Pat revealed, "He tearfully asked me one thing, 'Will you take care of my girl?' and I said I would." "And the tears rolled into his coffee because he knew he was moving and planned to take her with him, but he was willing to leave her with me," Pat recounted. The two eloped in November 1953, and wasted no time in starting their family, having four daughters in five years. The two chose to settle in Teaneck, New Jersey for this chapter of their shared lives.

Rejoice in the birth of our Lord and Savior. May the blessings of Christ be upon you and your loved ones this season and into the New Year. pic.twitter.com/eyfVqUwXN5

Eventually, they moved to Beverly Hills where they spent 50 years of their lives watching their daughters grow up and start families of their own. Together, the pair had the privilege of welcoming 16 grandchildren and 10 great-grandchildren. "The thing that would most fulfill her was to be a good wife, and mother, and grandmother and to create happy homes," Pat said of the wife he loved so dearly and evidently holds in high regard. He divulged how the two would often sneak away for "second or third honeymoons" together on ocean voyages.

Pat and Shirley's Christian faith helped steer them through any rough waters they chanced upon, helping them build a strong marriage that saw them support and encourage each other from the beginning till the end. Apart from supporting Pat's endeavors in the music and film industries, and being a doting wife and mother, Shirley was also a rather enterprising and talented woman. She was a recording artist, television hostess, best-selling author and above all, a humanitarian. She even went on to start a billion-dollar Christian ministry.

Our sympathy to Pat Boone and family in their loss of their loved one. https://t.co/E1baFpRsOm

"We didn’t have the perfect marriage, but it helps to marry a magnificent woman," Pat said truthfully. "You make your commitments to God and each other, and in troubled times, you hang on to the commitment to God, and to your kids. You see the problems through and you find you’re stronger because of it." She had a heart full of love and compassion, always looking for ways to give back to others. This led her to create an organization called Save the Refugee which then became Mercy Corps - one of the most prominent worldwide hunger relief organizations.

Happy Holidays from our global team! This year, you helped us impact the lives of nearly 28 million people in more than 40 countries around the world. Let's continue making "possibility" our guiding compass.

"[Mercy Corps] continues to grow, and all of this started from her tears and her conviction that we could do something," Pat noted. "She was always ready to interrupt what she was doing and help somebody else." Shirley's good nature and giving heart made her a cherished component in the lives of many. Her departure from this world will certainly have a tangible impact in every circle that she was a part of. With her gone, there is that much less good in the world. Hers are not easy shoes to fill.

Shirley and Pat Boone had been high school sweethearts, and they married when he was 19 and rising to stardom. https://t.co/87XwP0CeOC

Her desire to give back is one of the things Pat confesses he will remember most about his wife. "She had an honest, deep, earnest love for people and her desire to help people as activist," he shared. "She was so easy to love because she loved so easily and so naturally." It is going to take a while for Pat to learn to find his way through life without his partner by his side. In the lonely days and nights that stretch out before him, at least he has over six decades of precious memories to keep him warm and remind him that for a season, he was loved by a truly spectacular woman.