Meet Painted Bunting, The Most Colorful Bird Native To The United States

The Painted Bunting is a native species to the United States known for being the most colorful bird. 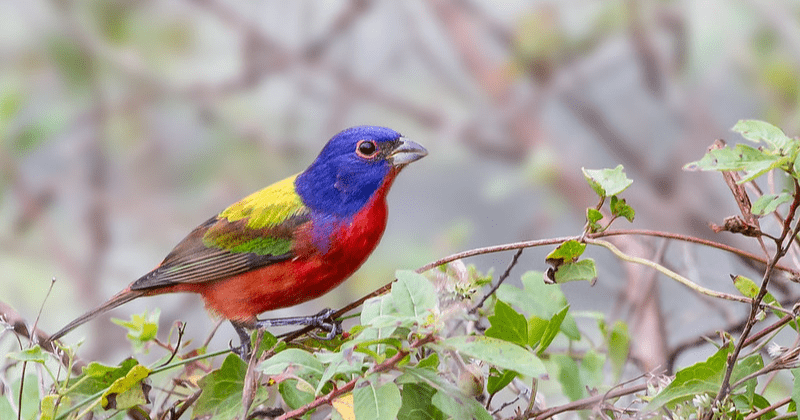 Birds are one of nature's most exquisite creations. From the tiny and colorful hummingbird to the significantly hefty ostrich, there are plenty of bird species spread across a broad range of spectrums—sizes, origins, colors, and so on. According to the Cornell Lab of Ornithology, there are over 2,059 species of birds in the United States alone which makes up for over 25% of the overall bird species in the entire world. Of all the native species birdwatchers hope to catch first, the Painted Bunting ranks somewhere on top for their vivid appearance. Known scientifically as the Passerina Siris, the male Bunting is dubbed as the most beautiful male bird in the United States are even said to have flown straight out of a children's color book. The bird's plumage is so well admired, their French name nonpareil, translates to "beyond equal".

A male bunting's body exhibits a mishmash of exciting colors—blue head, red stocky body, yellow and green feathers. Meanwhile, the female and the babies have a distinctive green with eye-ring. Buntings are commonly seen throughout Oklahoma, Texas, Louisiana, Arkansas, and Mississippi during the summer and even goes towards northeastern Mexico. During the migratory season, the Buntings fly past Mexico and Florida before settling down in the tropical regions of Central America for the winter. It is during these periods that they fall prey to illegal bird catchers in Mexico and the Caribbean, who cage the birds and sell them at a premium. They are occasionally seen branching out further north, including New York, Pennsylvania, and New Jersey. The bird is also found every few years as far north as New Brunswick, Canada. Several genetic analyses have also proven that the species can be divided into three main groups based on their breeding grounds: eastern, western, and central groups.

Don't let these pretty little birds deceive you for they are fiercely territorial and especially lethal when it comes to their family matters. According to Birds and bloom, the buntings become extremely fierce during the mating season. Reportedly, they stake out three to eight acres of land from their nesting area and defend it vigorously against other males, attacking and injuring them to assert dominance and maintain their territory. Once they've secured the region, they proceed to start their mating call which involves spreading their wings and singing to attracting prospective partners.

When it comes to their eating habits, the painted buntings are seed-eaters for most of the years as they tend to favor seeds from native grasses like switchgrass. In the breeding season, however, they change their patterns and switch to protein-heavy creatures like spiders, grasshoppers, caterpillars, snails and other insects for energy. Female buntings are even said to steal bugs caught in spiderwebs and even munch on spiders to feed their young ones. Once the breeding season comes to an end, these creatures return to eating seeds they find on or near the ground. Female buntings take care of the young till the time they are ready to leave the nest about 12-14 days after hatching, while the male is said to take over feeding duties in case female begins a second nesting attempt. Buntings typically lay two broods per year which can stretch to three in some cases and four in the rarest of occurrences.

Climate change and loss of biodiversity have had a significant loss on the population of these birds with a 55% decrease recorded over the last thirty years. At present, the global population of this bird is estimated to be around 3.6 million individual birds. Due to a drastic drop in their numbers, the IUCN Red List has given them a 'Near Threatened' evaluation.