Pink's 9-Year-Old Daughter Shows Off Her Angelic Voice In New Video, She's Just Like Her Mom

The singer shared a TikTok video of her daughter singing 'Cover Me in Sunshine.' 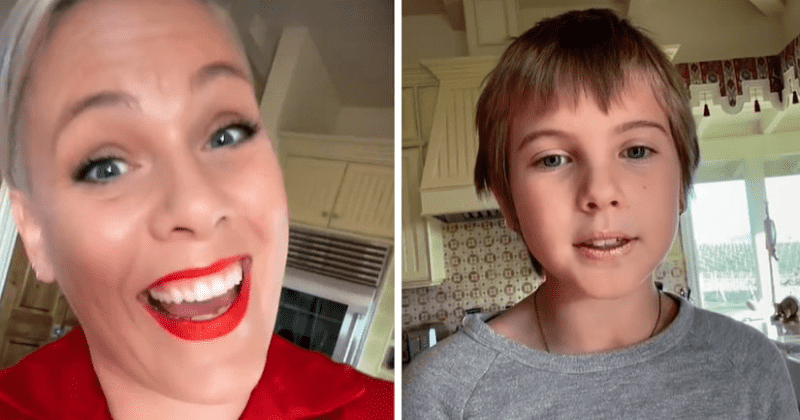 Pink's 9-year-old daughter, Willow Sage, seems to have inherited her mom's voice. Recently, the pop singer made her TikTok debut with a video showing off Willow's beautiful voice. The video begins with the duo engrossed in a conversation as the young girl is clad in a gray T-shirt with a rainbow and a smiley face. She turns to her mom and says: "Or I could just sing 'Cover Me in Sunshine,'" before breaking into a song, Good Morning America reports.

"Cover me in sunshine. Shower me in good times. Tell me that the world’s been spinning. Since the beginning and everything will be all right. Just cover me in sunshine," she sings in the most angelic voice. After finishing the song, the child snaps her fingers, smiles at her celeb mom, and says: "OK". A visibly proud and happy Pink turns the camera towards herself and shouts out an excited "OK", in response. Thousands of people expressed their surprise at the singing skills of the 9-year-old. "She's just as awesome as her momma," one fan wrote, according to PEOPLE. Another commented, "Adorable and so talented."

As it turns out, the video was Pink's way of announcing her upcoming single. According to Billboard, the "Just Give Me A Reason" singer took to Twitter on February 10 to announce that she and her daughter will be releasing the original song on Friday. In the video, which also served as a pick-me-up for her fans after the "tumultuous" times we've had since last year, she said: "We thought we'd put it out around Valentine's Day as a big old hug and kiss to all y'all." Pink's collaboration with her daughter doesn't come as a surprise as she's always been vocal about her daughter's interests and everything she's doing to encourage her.

In 2016, the 41-year-old spoke to PEOPLE and said the little girl has been a great contributor to her career. "I know everybody with kids says this — that their kid is their barometer of cool — but Willow tells me which songs of mine she likes and the way she does that is she just starts singing them after one listen," and added, "She is my inspiration for everything." According to Today, the mom-daughter duo teamed up before in the past with Willow appearing in her mom's 2016 video for her single “Just Like Fire”, and recording a version of “A Million Dreams” in 2018, which appeared on "The Greatest Showman: Reimagined" album. In November last year, the pair teamed up to perform "The Christmas Song" on ABC’s The Disney Holiday Singalong.

Willow is one of two children the singer shares with husband Carey Hart. In September last year, Pink had also shared a video of her 4-year-old son Jameson Moon in which they sang a made-up song "Hidden Nuggets." Sadly last year, Moon tested positive for coronavirus and was confined to weeks in bed. "There have been many nights where I cried, and I have never prayed more in my life," the singer said in an Instagram Live video in April, LA Times reported.