Auntie Anne's Owner Lost Her Daughter, Then Was Abused By Pastor For 6 Years, Yet Built A Pretzel Empire

Currently, Auntie Anne's 'oh-so-soft' pretzels are available across 1,500 outlets in malls and food courts all over the world. 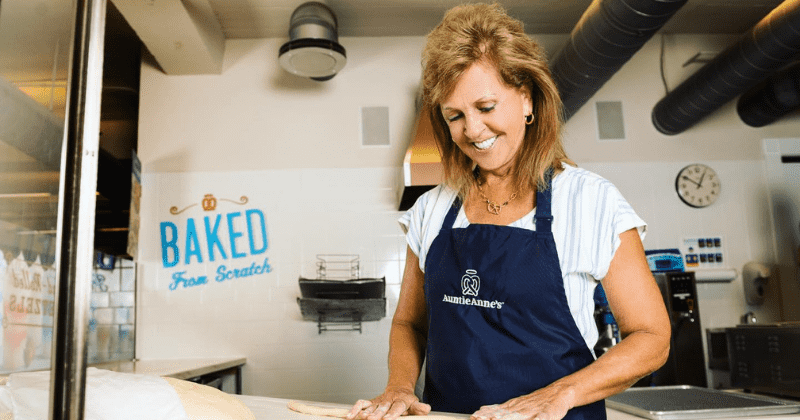 When Anne Beiler started her pretzel shop through a market stand in a small farmer's market in Downington, Pennsylvania in 1988, little did she know about the successes that would follow her in the years to come. Currently, Auntie Anne's 'oh-so-soft' pretzels are available across thousands of outlets in malls and food courts all over the world. Her humble beginnings as a small business owner have been dissected several times in business schools, leadership seminars, success stories, and motivational speeches. Yet none of them come close to capturing the richness of her entrepreneurial journey—one filled with the loss of a loved one, heartbreak, adversity, abuse, optimism, achievement, and at long last, the elusive triumph, reports TIME.

Back in 2013, Fortune did a video story where the crafty businesswoman talks about the journey of taking her single-store pretzel business into one that is recognized all over the world. "I was 19, and my husband, Jonas, was 21 when we married in 1968," said Beiler, starting her story. "We were a happy couple, and my only dream was to be a mom. We had two daughters until my daughter Angela was killed accidentally in 1975 when she was hit by a tractor on our farm." The death of her daughter left the family hollow and emotionally weak: "My life turned upside down." And so, Beiler and her husband became distanced which then led to her next pitfall, as she sought her pastor's counsel outside of her Amish-Mennonite community.

#TIL that the founder of Auntie Anne's started her business after it was revealed that she and other women were abused by a community member. Her husband wanted to give free counselling to the community, so she opened her pretzel shop to fund his goal an… https://t.co/vklVmRXNUl

She continued: "For six years I stayed in an abusive sexual relationship with that pastor, living in guilt and shame. The pastor’s license was revoked when his behavior with several women came to light." After she managed to get away from the pastor, she went back to her husband in 1982 to begin a new life with her husband. Life, however, wasn't easy financially as they were living paycheck to paycheck. "My husband was a mechanic, and during our marital crisis, he had studied to become a marriage and family counselor. He wanted to offer counseling services for free to our community, and we needed income. So I told him, “You’ve stayed with me despite all that I’ve done. So do what you want to do, and I’ll go to work.” And thus began her first iteration of the now successful business in the farmer's market, which soon became a major success among the locals, sowing the seeds for a bigger business.

Then a friend told her an Amish pretzel and icecream store was up for sale. "A friend told me that an Amish-owned store selling pretzels, ice cream, and pizza in the indoor Downingtown, Pa., farmers’ market was for sale. The owners wanted $6,000. I was astounded at the price because those kinds of weekend stores can bring in anywhere from $25,000 to $200,000 a year, depending on the location. We had no money, so we went to my husband’s parents, and they gave us the $6,000." The Beilers decided to tweak the recipe and within a year success beckoned as they opened eight standalone stores and one more in a local mall. Even though Beiler barely passed out of school (she only did her ninth grade) and didn't have any marketing, she managed to grow her business initially as the word of mouth and the rave reviews her products received helped take her venture to the next level.

Am I the last person alive to know Auntie Anne's backstory?

Woman lost a daughter, was raped by the pastor she went to for grief counseling, found out after 6 years of abuse that he was doing it to EVERYONE SHE KNEW.

A year later in 1989, the first Auntie Anne's franchises opened throughout Central Pennsylvania. By 1992, Auntie Anne's had opened its 100th store in Granite Run Mall, Media, Pennsylvania, as published in her book Twist of Faith: The Story of Anne Beiler, Founder of Auntie Anne's Pretzels. As of 2020, Auntie Anne's can be seen across the Americas, Europe, Asia, Australia, and Africa.