trending celebrity people lifestyle news animals
Over Half Of Dog Owners Kiss Their Pets More Than Their Partners, Finds Study

Over Half Of Dog Owners Kiss Their Pets More Than Their Partners, Finds Study

A survey conducted by Riley’s Organics, an organic dog treat company, showed that over half of the dog owners in the country love their pets more than their spouses. 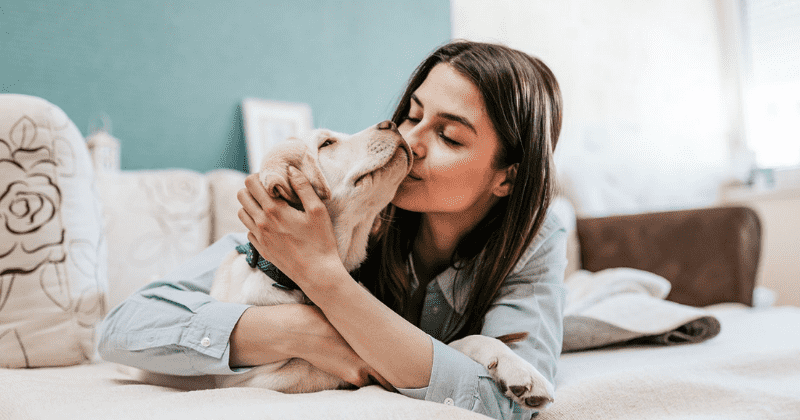 We often see humans forming better relationships with animals than with our fellow humans. While this doesn't go on to show that we as a species are a falling apart in communication and togetherness, but it definitely means that you will find many people who have a more intimate friendship or partnership with their pet dog or cat or bird or even hamster, than they do with their actual human partners and spouses.

It just so happened that an organic dog food company called Riley's Organics has conducted a survey which went on to show that 52% or more of America's dog owners, share a better, healthy and loving relationship with them than they do with their own spouses. The survey found that "52% of respondents admitted to kissing their dog more than their partner. This trend continued into the respondents’ sleep habits. Out of those surveyed, 52% said they prefer to sleep in bed with their dog over their partner."

According to the survey, 52 percent of those polled said they gave their dogs more kisses than their significant others — and 61 percent said they kiss their dogs on the mouth. Lastly, fifty-two percent also claimed they’d rather share a bed with a dog when given the choice between a dog or a partner.

Well, obviously they are giving the dog full scores in the cuddling section but that doesn't have to mean that dogs would replace their human partners. Rather, there are no limits to the friendship between humans and canines, and that is definitely emphasized by the sheer volume of dog lovers in the world.

Riley's Organics themselves weren't surprised by the results as they claimed that up to 94% of the survey's participants considered dogs to be their best friends. Riley's products are reputedly made from the highest quality of ingredients. According to the company, they are 100% natural, human-grade ingredients that are USDA 'Certified Organic' and made in the USA.

The reasons for the exceptional and intimate companionship between people and their dogs are many. There is a special bond between us and canine (felines too) due to our mutual desire to live in the dominion of other species.

Cats and dogs recognize the innate technical mastery that humans have over the surroundings and hence give us a superiority complex (Dogs especially). In return for food, shelter, and companionship, dogs offer what is nothing less than loyal friendship and service too. Riley's Organics previously did another study a year back. They found that half of the pet owners admitted to skipping out on social events to hang out with a dog or cat. This is also understandable. Often, in social situations, peer pressure and anxiety get the better of many. At that point, social interaction becomes more of a chore than an enjoyable experience. Hence, people rather be at home with their pets, who offer them sublime companionship at the cost of having to expend little to no energy.

Of course, this isn't really a competition at the end of the day. Pet owners, like anyone else, are at perfect liberty to spend more time with their furry companions than their own partners. However, this doesn't have to mean that one comes at the cost of the other. The people who admitted to wanting to rather kiss or spend time with their pet than partner obviously did so for their own unique reasons and the fact that it was over 50% of the people has nothing to do with their partners.

Rather it has everything to do with just how amazing dogs are as pets and companions. Having a loving dog as a pet is undoubtedly one of the finer feelings in life, indeed, there are few animals in nature that love and care for humans as much as the canine species.