Jake and Jamie Hyland, and their toddler Uriel, were evacuating from the property in rural Okanogan on Sunday where they were trapped. 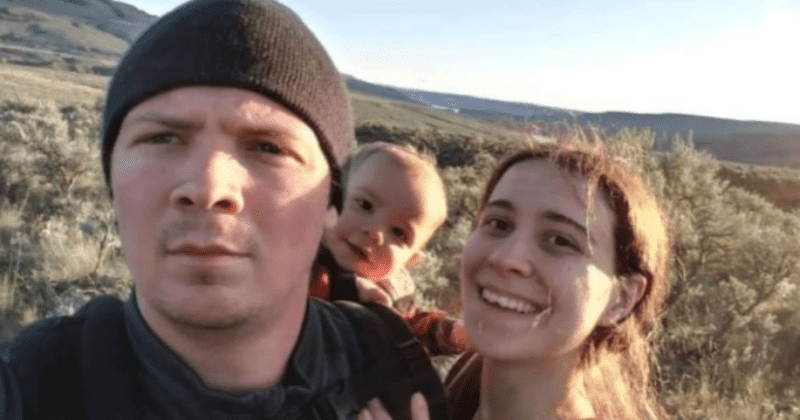 A 1-year-old boy has died and his parents badly burned as they tried to flee from a wildfire in Washington State. Jake and Jamie Hyland, along with their toddler Uriel, were evacuating from the property in rural Okanogan during the midnight hours of Sunday after they were trapped by the Cold Springs Fire. Search and rescue teams discovered the family's burned truck abandoned on the roadside and found the couple terribly injured along the banks of the Columbia River. The baby, meanwhile, was dead, pushing the death toll from the fires along the West Coast to seven, reports The Daily Beast. The parents were then transported to Three Rivers Hospital in Brewster before being airlifted to Harborview Medical Center in Seattle.

Loved ones tell KHQ that Jake and Jamie Hyland were alive but had serious burns across at least 50% of their bodies. Their child did not survive, according to family members of the Hylands. https://t.co/Ezk65YVq6t

While 26-year-old Jamie suffered burns covering 40-50% of her body and had to undergo surgery on her arm, 31-year-old Jake sustained burns on 25% of his body and was being readied for surgery as well, a GoFundMe page set up in the family's stead revealed. Although the exact extent of the injuries is unknown, doctors are working to clean up the wounds to determine the severity of their injuries. On the fundraising page, a family member wrote: "They are both still critical at this point, but Jamie is more so than Jake. They have significant injuries and a long road ahead of them. Please keep them in your prayers." The family, which lives in Renton outside Portland, was visiting the house in Okanogan over Labor Day weekend and the relative said that the property was remote and didn't have cell service. They added that it could have been the reason why they didn't receive alerts about the blazing fires, leading to a delayed evacuation.

Sheriff Tony Hawley of Okanogan County said his office was alerted of the Hylands missing status on Tuesday and were located hours later. The investigation has revealed that the family was forced to abandon their truck in a bid to escape the fire. The blaze, which erupted on Sunday night near Omak, has burned through 163,000 acres and was only 10% contained on Wednesday night. Hawley has said that although the reason for the fire had not yet been determined, it would be labeled a homicide if arson was confirmed. "It would be treated as a homicide if it were to be determined to be a human-caused, criminal fire," he said. "That's the way we're investigating this at this point because if we don't collect everything at this point, we can't go back and do that."

Jake and Jamie Hyland made a harrowing escape from the Cold Springs Fire, relatives said, abandoning their pickup truck and heading to the Columbia River, where rescuers miraculously found them Wednesday morning.

But their little boy did not survive. https://t.co/j2LGFhLieI

The baby's death was possibly the most tragic wildfire-related death incidents Hawley had witnessed in more than 25 years in the department. "The death of a one-year-old doesn't even compare to when we reach our adulthood and we have choices to be placed," he said. "To even be talking about the death of a one-year-old is just devastating," he added. The sheriff also commended the efforts of firefighters fighting the blazes despite working with minimal resources. "We're competing for resources just like everyone across the nation,' he said. The wildfires started in Northern California but have now jumped to over 90 major fires across 13 states and have burned through 3.4 million acres over the past week including in towns across Oregon, Washington, and California. In another fire in Oregon, a 12-year-old boy and his grandmother were killed by a fire in the Santiam Valley. The same fire was also expected to have caused another death in Ashland, Oregon, and another three were feared dead in California Bear Fire, which cut through Butte County on Thursday.

“It’s a miracle with a sad ending,” Jake's cousin, Jim Mabry, said. “They survived, but lost a child.”

He added, “They loved their son. He was their ray of hope.” https://t.co/j2LGFhLieI