The event at the Oaks at Northpointe in Ohio was the idea of its oldest resident, a 94-year-old named Millie 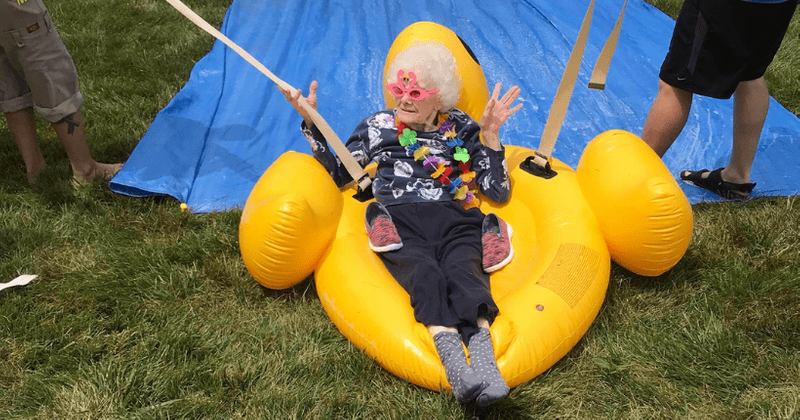 It's never too old to have fun. Trust residents at the Oaks at Northpointe, a care home for the elderly in Zanesville, Ohio, to show you what this saying means. The home has around 98 elderly inhabitants. But some of them became children for a while slipping and sliding on a water slide. The idea was of one of the oldest members at the home named Millie. At 94 when most people would not even dare engage in any kind of physical activity, Millie just not suggested the slide but also was an active participant in the same, when it was finally put in place in the nursing home's compound. Millie and other like-minded elderlies knew that the summer was here and they wanted to have some fun of their own. One can just see the joy in their eyes on the parasail that glides down the slide, in a video posted by the home on their Facebook page.

When people got to know and saw the video of this fun-loving bunch of aged people, they couldn't help but admire their approach to and zest for life. The video has gone viral viewed over 8 million times and with 122,804 shares. The event was organized as part of the Senior Health and Wellness Day at the home. Jackie Altier, 35, the executive director of Oaks at Northpointe, told PEOPLE, “All the residents loved it! They said that the slip-and-slide event brought back their childhood. They said it reminded them of the good times that they used to have with their families and their kids, and when they were kids. They had a blast.” Millie can be seen in the clip going down the slide with the help of the institution'ss staff. She was the oldest to take part. A total of 30 residents participated in the slip-and-slide event. The youngest resident was 62 years.

Altier said about Millie, “She went down the slide three times! She loved it. I have three different videos of Millie on the slide and as she’s coming down she’s yelling, ‘I love it! I love this!’ She said …. the only thing she’d change is she wanted to go down the whole hill, but we could only go down half of it.” Back in February, the home held a sledding event. Millie then asked the staff to next organize the water slide event which they agreed to. “We immediately started talking about how we could do this safely. We went with a duck because of the head, that would provide support for the people who wouldn’t be stable in a seated position without that support. We used gait belts. We chose a location close to the curb so that way we could transfer the patient onto the duck,” said Altier who added said she never expected so many people to watch the video and be touched by it.

She added, “We’re completely shocked. I said, ‘Oh my gosh! Millie’s famous!’ One day when we were coming down the hall, [Millie] stopped me and she goes, ‘I don’t know if you know this, but I’m famous. So I’m gonna start charging for my signature.'" The last we heard, the home was planning to hold another similar event something on the lines staycation and with the inclusion of the slip-and-slide to come back.