There were no complaints from the men in the ward where she was assigned. 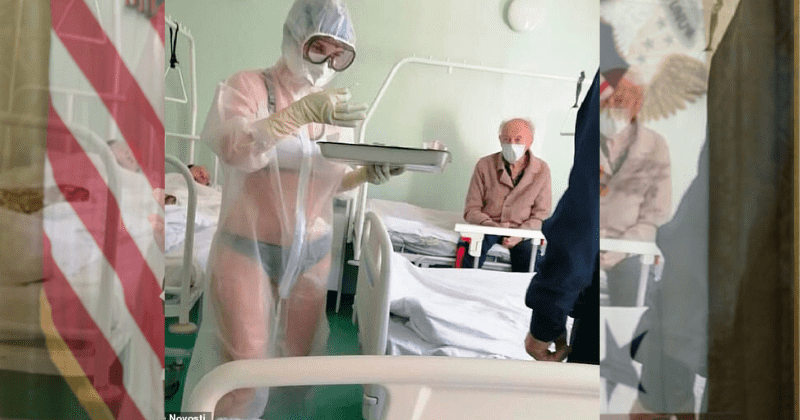 A nurse in Russia has come under fire after wearing only lingerie underneath her transparent personal protective gown. The incident occurred in a hospital in Tula, 100 miles south of Moscow, where the 20-something-year-old unnamed nurse was treating patients in an all-male infectious disease ward. According to Daily Mail, the nurse resorted to wearing just her undergarments because she felt "too hot" when she wore her hospital gown and the personal protective equipment on top of it. Her dramatic attire and the subsequent revealing picture went viral with reports saying the patients in the ward had "no complaints" to make.

However, this didn't sit well with the hospital chief who chose to punish her for "non-compliance with the requirements for medical clothing".  When questioned about her actions, the nurse told her managers at the Tula Regional Clinical Hospital that she did not realize the PPE she had on was so transparent. Her audacious move didn't go unnoticed by the regional health ministry either who reported that "a disciplinary sanction was applied to the nurse of the infectious diseases department who violated (uniform) requirements".

The elderly patient in the background doesn’t seem to be offended. Probably the best thing that happened to him all day.

The chiefs at the hospital first said the woman was wearing lingerie but later corrected themselves and said she had a swimming suit on beneath the gown. Despite the massive furore, the nurse has chosen to remain private and the extent of the disciplinary action slapped against her remains unknown. A patient housed at the ward reportedly said there was no objection from men in the coronavirus ward but admitted that it caused "some embarrassment". Meanwhile, the local newspaper, Tula News, congratulated the nurse for offering entertainment in such dire times. "At least someone has a sense of humour in this gloomy, gloomy reality," said Sergey Ratnikov. Another person named Albert Kuzminov questioned, "Why the reprimand?"

I’m writing a book titled “Only in Russia” Chapter 1: Nurse disciplined for wearing only bra and panties under PPE gown https://t.co/AEyAdkoUpq

Another supporter from the ward took her side and said: "Everyone shouted at her, but no one paid attention that she was dressed in this way because of the heat." He instead put the blame on the higher-ups at the hospital. "Maybe you need to yell at the management … because there is no normal air conditioning here," he said. A commenter named Marina Astakhova added: "Well done, she raised the mood of the patients."  Valery Kapnin wrote: "Why punish the nurse, you need to reward her. Seeing this outfit, no-one wants to die." The incident received some amusing response on Twitter as well. Charlotte Gracias wrote: "Well I applaud her for wearing #PPE and that's all that matters", and followed it up with a series of laugh emojis.

To be fair, it's stinking hot under full PPE.

This incident comes to light as Russia continues to struggle in its handling of the pandemic which has seen more than 317,000 cases so far, second only to the United States which has over 1.58 million confirmed cases. Death figures in the Siberian nation have reached 3,099 with several international sources claiming the Putin administration is hiding the real numbers while stating that many patients died of other conditions. Former Chess GrandMaster Garry Kasparov also criticized the government tweeting recently that all the numbers Russia has reported are fake.

Are you kidding? BECAUSE THEY ARE LYING, as they do about everything. Stop having medical experts write about Russian coronavirus and use only fake news experts. Every number is a lie. https://t.co/aEGshQV8iH

The head of Russia's Covid-19 monitoring centre,  Alexander Myasnikov, who was also a former TV doctor, shocked viewers across the country with a painfully blunt statement on the country's ongoing fight with the virus. "The infection will anyway take its toll," he said. "It'll take its toll. We will anyway all get sick. Those who were supposed to die will die." The statement is especially distasteful considering it has already lost 97 medical workers to the virus with hundreds more already infected due to improper enforcing of lockdown measures and the significant lack of personal protection equipment for hospitals.