New Orleans Musician Wants Kids To Give Up Guns In Exchange For Trumpets: "No Questions Asked"

Trumpeter Shamarr Allen said he was saved from a life of gun violence only because he found refuge in music. 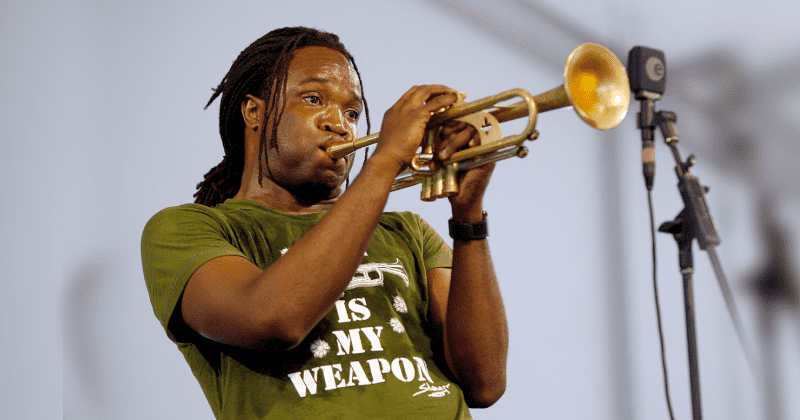 New Orleans trumpeter Shamarr Allen wants kids to ditch guns for music after he was concerned about the rising gun violence among kids and is keen to do something about it. Allen has started a trumpet-for-gun exchange campaign called "Trumpet Is My Weapon." He knows all about the healing powers of music, considering he was saved from a life of gun violence after he sought refuge in music. He has so far exchanged four trumpets for guns and handed the firearms to the cops. "I had some trumpets lying around, and I know for me, the trumpet saved me," said Allen, reports NPR. He often wears a t-shirt that reads: Trumpet is my weapon at music festivals to promote non-violence.

It was the death of Devan Bryant, a 9-year-old boy, that spurred him to start the campaign. Bryant was fatally shot in front of his home earlier this month. The incident made him think about his own son. "I have a nine-year-old son, so for me, it just hit me different," said Allen, who hails from New Orleans' Lower Ninth Ward. He took to social media and announced the campaign.

He promised kids wouldn't need to answer any questions on the gun. Allen wanted them to know he was offering an opportunity to spurn the culture of gun violence as he did all those years ago. He wrote: "To all the youth in New Orleans, Bring me a gun and I'll give you a trumpet no questions asked." Allen said he wanted the kids to feel safe. "I wanted to build a relationship and trust with the kids so that they wouldn't have to worry about getting in any trouble," he said.

Allen didn't have the authority to ask kids about the guns, so he reached out to Mayor LaToya Cantrell and asked if it could be done. Mayor Cantrell put him through to Shaun Ferguson, the chief of police. He explained the program in detail to the chief and told the officer that it was imperative that kids get a chance to escape the vicious cycle. He told the chief of police that they couldn't ask about the guns if the program had to work. "I said 'Listen, I have a different connection with these kids because I grew up like them,'" said Allen, drawing upon his own life experiences. "They aren't bad kids, they're just dealt into bad circumstances."

Chief of police Shaun Ferguson agreed with Allen and told him that all they wanted was to have the guns off the streets. "People don't understand that these kids are trying and wanting to do other things. But there's just nothing for them to do," said Allen. Once the police agreed, he posted about the exchange campaign. The first exchange he made shocked him. It was a girl with a fully loaded gun that approached him. Allen said he would have never guessed she had a gun but she was really excited about swapping it for a trumpet. He took it one step further. He gave her contact information of local musicians who volunteered to give the kids free music lessons as part of the program. He knew it was a way of initiating them into music.

In no time, Allen ran out of spare trumpets that he could trade. Kids have started to come to him. The trumpeter has now started a fundraiser with the intention of buying music supplies that can be exchanged. He has raised more than $37,000. Many have also donated instruments to the campaign. "The trumpet was the first thing that showed me, 'Oh I really don't have to be here. It's really a whole other world out here,'" said Allen. He is hoping the trumpet can do the same for other kids in New Orleans today. "Much like a lot of the gun violence happening in my city by young people, it is heartbreaking to know and see this happening to our kids.  My thoughts and actions immediately went to how can I contribute to reducing the chances of the continuation of this level of gun violence amongst our youth," wrote Allen on the GoFundMe page.