Grandfather With Alzheimer's Gives His Navy-Bound Grandson His First Salute

Nicholas Allen, 22, traveled to his grandfather's home in South Carolina because he could not come to the commissioning ceremony due to his Alzheimer's 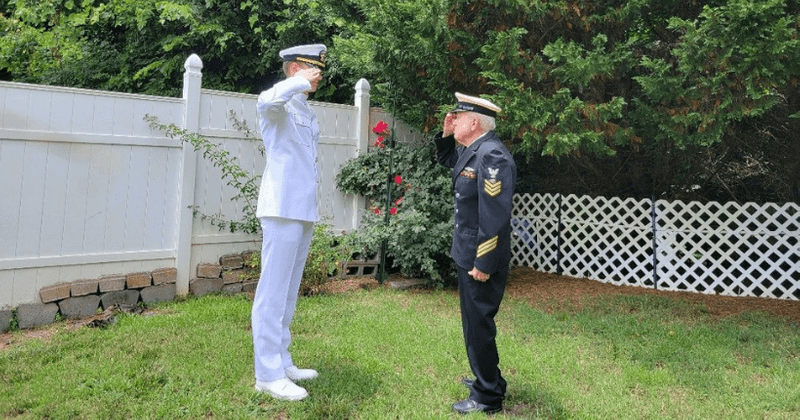 A newly minted US naval officer shared a heartfelt honor to his ex-navy grandfather by offering him the first salute. For the uninitiated, it is a military tradition for a new officer to receive their first salute from someone already in service. Nicholas Allen, 22, graduated from Cornell University and was set to go to nuclear power school to work on a Naval submarine. He hoped his grandfather Gail Allen, 78, could see him being commissioned to the services in a ceremony in New York. But that was not to happen due to his grandfather being diagnosed with Alzheimer's disease last year. One can say his grandfather was the one, who inspired him in his career choice. Growing up, Allen said he heard fond stories of his grandfather's service days in the Navy. So Allen knew his grandfather had to be involved in his special day one day or another.

"My dad would tell the stories from my grandfather of his military time. When it came time, I decided I also wanted to be in the military. And I knew I liked engineering and knew that career path with submarines would be a good one to follow," Allen told Good Morning America (GMA). Allen decided to travel to South Carolina where Gail lives. If his grandpa couldn't come to the ceremony, Allen decided he could travel to his grandfather. "It's a really big deal. It's a sign of respect to be given the first salute," Allen said. A sweet picture of Gail and Allen saluting at each other in the veteran's backyard, both wearing uniforms was clicked by Allen's father, an ex-military man himself. Ret. Lt. Colonel Kenneth Allen, served 24 years in the US Army and is presently a physics and nuclear engineering professor at the US Military Academy in West Point, New York.

He shared the picture on his Linkedin account which soon went viral.  Shared just four days ago, the post has got nearly 15,000 likes and hundreds of comments congratulating the family while expressing their love for Gail and his grandson. "My father suffers from alzheimer's. He couldn't come to my son's graduation and commissioning so we went to him. Forty-five years after hanging up his uniform, Radioman First-class Allen gave Ensign Allen his first in-person salute. For those who have dementia there are good days and bad. This was a good day,"  Retd. Lt. Kenneth captioned the picture. Gail served in the navy for 13 years and left only so he could gain custody of his two sons. Retd. Lt Kenneth said, "He gave up his career for us. He always talked about the Navy and was so proud of it that I decided I wanted to join the military, too."

About his dad's condition, he said, "He remembers things from a long time ago. He remembers his time (working on the family) farm and his time in the military. He forgets things short-term like whether or not he has eaten." About the viral picture, Retd. Lt. Kenneth said his dad had not worn a uniform in decades but the one he wore fit him perfectly. "My mother was determined that there was no way my dad's uniform was going to fit, and it fit perfectly. We put it on him and he came out and he was standing taller than he has in years. My mother was in tears," he said while also adding it was the first time he and his son had seen Gail in a uniform. Retd. Lt. Kenneth added, "I never saw him in uniform, but he talked about the Navy all the time. He still to this day wears his (Navy) submarine service hat. It was such a big deal to him and so important to him."