The documents contains graphic details of the abuse underage girls were forced to go through at the hands of Maxwell and Epstein. 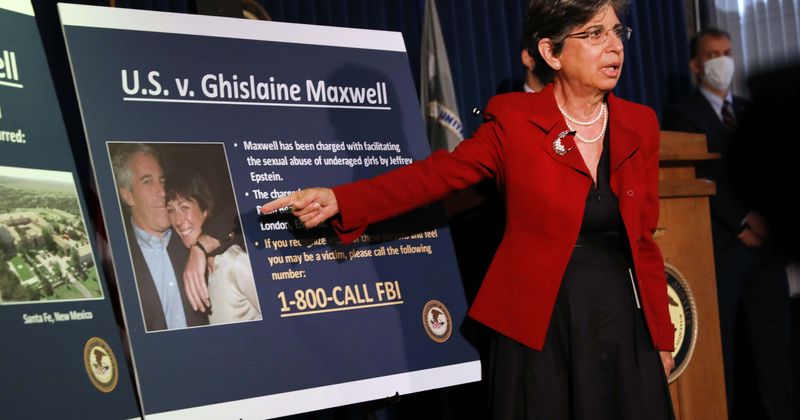 Newly unsealed court documents have revealed that Ghislaine Maxwell had orgies with underage girls. These claims were made by Virginia Roberts, now Giuffre, who gave a detailed account of all the activities that went down on billionaire pedophile, Jeffrey Epstein's private island where there was an alleged child sex ring that involved big names in America. Giuffre also said that she performed sex acts on Maxwell in front of Epstein, reported the Daily Mail. She stated that Maxwell had engaged sexually with girls ranging from the ages 15 to 21. These details come from unsealed court documents from the 2016 defamation lawsuit Giuffre had filed against Maxwell.

The infamous case of the "pedophile island" where young girls were flown via private jet regularly to participate in sex sessions brought Epstein and Maxwell at the forefront of the investigation. When asked if she could describe the girls who were taken to the island, Giuffre said, "There's so many, I don't know where you want me to start. There were blondes, there were brunettes, there were redheads. They were all beautiful girls." According to a report by The Sun, Maxwell had also allegedly groomed many young girls to become "sex slaves" including Giuffre.

Men who Ghislaine Maxwell directed Virginia Giuffre to engage in activities with, according to Giuffre's deposition:

The document also revealed that Maxwell would identify and befriend minors that Epstein would later abuse. Among them was "Victim 1" who met Maxwell when she was just 14 years old in 1994. She would regularly take her to the movies and on shopping trips to groom her. "She also asked her about the school, her classes, her family and other aspects of her life," the indictment reads. "She then sought to normalize inappropriate and abusive conduct by, among other things, undressing in front of her and being present when she undressed in front of Epstein." The minor had engaged in "group massage sex" with the accused on multiple occasions.

ghislaine maxwell could not have “slept with girls as young as 15” children cannot give consent. she raped them. she is a rapist. words mean things and it is vital that news organisations use the correct language when reporting this case.

Manhattan prosecutor Audrey Strauss said, "Maxwell played a critical role in helping Epstein to identify, befriend and groom minor victims for abuse. In some cases, Maxwell participated in the abuse herself." She also added, "Maxwell and Epstein worked together to entice these minor victims to travel to Epstein's residences - his residence in New York City on the Upper East Side, as well as Palm Beach, Florida, and Santa Fe, New Mexico. Some of the acts of abuse also took place in Maxwell's residence in London, England." The presence of a woman had made it easier for the young girls to fall prey to Epstein's abuse.

Donald Trump’s friend Ghislaine Maxwell is accused of sexually abusing underage girls as young as 15. Is ANYONE surprised that Trump recently told reporters "I just wish her well, frankly.” pic.twitter.com/Yjyrk4us4d

In emails exchanged between Epstein had communicated with Maxwell telling her she had done "nothing wrong." But this directly contradicted her claims that she had no contact with Epstein at all, reported BBC. Giuffre had then accused the two of them of being equally involved in the sex-trafficking racket. In the disclosed documents she is saying, "Jeffrey and Ghislaine are joined hip by hip, okay? So they both trafficked me. Ghislaine brought me in for the purpose of being trafficked. They trafficked me to many people." She also added that she was regularly abused by Maxwell.

Ghislaine Maxwell's bail memo from this month July 10, claiming "she’d had no contact with Epstein for more than a decade."

Undermined by a just-released email correspondence from 2015.

"She's the one that procured me, told me what to do, trained me as a sex slave, abused me physically, abused me mentally," Giuffre stated. "She's the one who I believe, in my heart of hearts, deserves to come forward and have justice happen to her more than anybody. Being a woman, it's disgusting." Ghislaine Maxwell, the 58-year-old daughter of disgraced media tycoon Robert Maxwell has denied all charges and pleaded not guilty. She will be facing trial in July 2021. "Virginia is an absolute liar and everything she has said is a lie," she has even said. "Therefore, based on those lies I cannot speculate on what anybody else did or didn't do... everything she said is false."

Reminder: Ghislaine Maxwell's attorneys are currently asking the Second Circuit to delay the release of her allegedly incriminating deposition by the close of business today.

Just now, lawyers for @MiamiHerald and @jkbjournalist told the court to deny a stay. @CourthouseNews pic.twitter.com/G85BUBnXyM