365 dni was released on the streaming platform a few days ago. 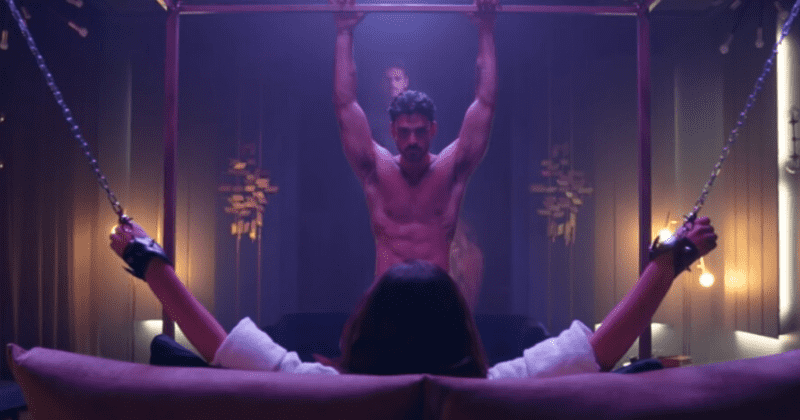 50 Shades Of Grey and its sequels shocked the world. But here's one movie that makes 50 Shades look like child's play and is causing quite a stir. Netflix just dropped a Polish movie named 365dni (365 days) that is almost short of an R-rated movie with scenes that will make people gasping for more. A lot of people have noticed the similarities between the two movies and especially the sex scenes that have a lot of BDSM. The Polish movie tells the story of a mafia leader in Italy named Massimo Torricelli (played by Italian actor Michele Morrone) who kidnaps a sales executive named Laura Biel (played by Anna Maria Sieklucka, a relatively unknown face in the industry) while she is on a vacation with her friends.

The mafia boss gives Laura 365 days to fall in love with him and in between are some red hot scenes and tension-filled lovemaking. On Facebook, one fan named Rose Landry wrote: I find it erotic how she defies him and then when the release is finally there it's very sensual, she craves that eroticism and when finally given explodes. Another fan named Nicole Johnson said she watched the movie only for the eroticism: The sex scenes are hot, it ends in a cliffhanger, not much of a plot, it's choppy and the music within some scenes is unnecessary. 🤷🏼‍♀️ In all honesty, I only watched it for the sex. Lauren Mitchell was so impressed by the movie that she screamed all the way while watching it: I swear they best get making that second quickly never screamed so much at my tv at an ending. I think it's my new favourite film x

The movie is originally based on a book of the same as the movie by author Blanka Lipinska, 34 according to a report in The Sun. The title literally translates to 365 Days. The movie's rights were bought by the streaming platform following the success of the book after it was released in 2018. Lipinska has also written two follow up books in the series which the fans hope will be made into sequels of the movie as well. Kelly Henry Smolenak was one such fan who knew about the other books and wrote: Loved it. I wish the books were translated so we could see what happens next. It’s a cliffhanger ending!!! According to another report in The Sun, Morrone has previously starred in TV series such as Sirene, Squad 6, and The Process. Most of the movie's fans can't seem to get how hot he is in the movie.

Me waiting for a sexy Italian mafia man to come kidnap me from this shitty town..#365dni #365days pic.twitter.com/QgacJMv1yI

me simping over massimo's "are you lost, baby girl?" at 3am #365dni pic.twitter.com/UjALJnzJeD

While referring to 50 Shades, Twitter handle Destiny@destvny1 said the mantle of sexiness had been passed from the 50 Shades leading man to Morrone. She wrote: Christian Grey can move, Massimo just took over. A lot of the fans also could not help but talk about a particular line that Morrone used in the movie - "Are you lost baby?." Of course, there were those who did not get what the hype was all about. Speaking about her role in the movie Sieklucka revealed at a press interaction, “The biggest surprise while working on this film was related to the emotions inside me, which I had to bring out. One of the most difficult experiences was to overcome shyness and to show the nudity we will see on the screen." Another prominent actor in the movie is 68-year-old Polish actor Bronislaw Wroclawski, a veteran actor in his country who has starred in many shows and 2009 film The Reverse.

This movie is romantizing abuse and rape but y'all think it's ok cause they're hot 🥴🤡#365dni #365dninetflix https://t.co/MRCr8CepLJ

He plays the role of Mario, Massimo's right-hand man in the movie.