A radio host has offered 'proof' that the actor's manhood is, in fact, the real deal and not the effect of CGI. 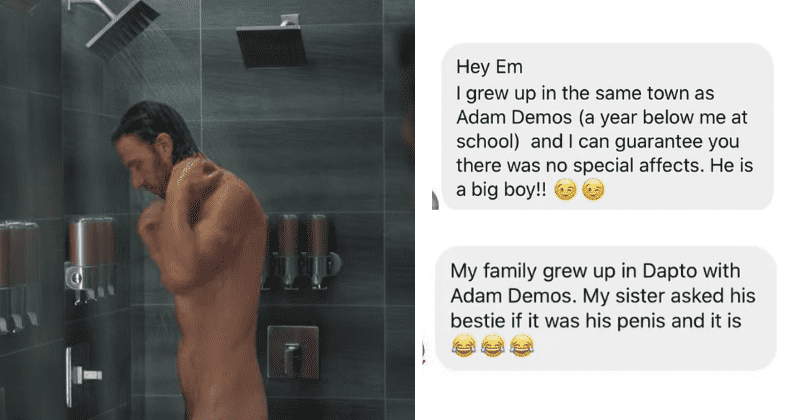 Netflix’s raunchy new relationship drama Sex/Life has gotten people talking about it, especially Actor Adam Demos' full frontal nudity in a shower scene. The actor who plays Brad on the show displayed his manhood and it was so huge that people believed it could possibly be a prosthetic or CGI effect. Apparently, it's the real deal, and the series creator Stacy Rukeyser confirmed that it was actually Demos in the shower, during an interview with Collider.

"No. That's not a body double. I mean, people usually ask is it real or is it a prosthetic?" she said. "And I can tell you what Adam Demos says about it which is, a gentleman never tells. So, we are leaving that up to the viewer's imagination."

#sexlife to us who paused episode 3 19:57,went back to 19:40 and played again.. did this 5 times.. just to be sure am not seeing things😂😂 pic.twitter.com/nLgfxoAHTv

In an interview with Entertainment Weekly, Demos says he was completely at ease with the shot. “I was okay with it because you read the script and know what you’re getting yourself into from the start, so I don’t think you would sign on to a show after reading the scripts and then say no last minute,” Demos said. “That doesn’t mean you can’t have discussions about comfort level, which they allowed us to have – and with the intimacy coordinator, so it felt a lot safer.”

Now, Australian radio personality Em Rusciano is the latest to join in on the discussions and even offered 'proof' that the actor's 'package' is the real deal and not the result of CGI, according to Daily Mail. Rusciano posted some private DMs she received on Instagram from women who grew up in the same town as Demos, and they vouch that every inch of him is the real deal.

Watching the new show Sex Life episode 3 location 20:00 and wondering if Netflix tracks how many times we rewind and watch again because… I’m on 4 times. 🥴🥴 pic.twitter.com/o2fS6PDjB8

The DMs Rusciano received read, "Hey Em, I grew up in the same town as Adam Demos (a year below me at school) and I can guarantee you there were no special effects. He is a big boy!!" Another wrote, "My family grew up in Dapto with Adam Demos. My sister asked his bestie if it was his penis and it is."

According to IMDb, Sex/Life is about "A suburban mother of two takes a fantasy-charged trip down memory lane that sets her very married present on a collision course with her wild-child past." The series follows mother-of-two Billie(played by Sarah Shahi), who is married to Cooper (played by Mike Vogel). She secretly yearns for the excitement and sexual freedom of her youth, which prompts her to reach out to ex-boyfriend Brad (played by Adam Demos), who also wants her back.

That full frontal of Adam Demos in Sex Life was jaw dropping!!!

Mike and Adam's characters end up in a gym shower together and Mike looks at Adam while he's showering, and that's when his huge schlong makes an appearance. For those wondering when this elusive scene with Adam Demo's full-frontal appears during Sex/Life, you can find it at 19:50. Also, Demos is dating Shahi in real life. She sure is a lucky woman, isn't she?