Nestle Toll House has launched the magical cookie dough in time for Halloween. 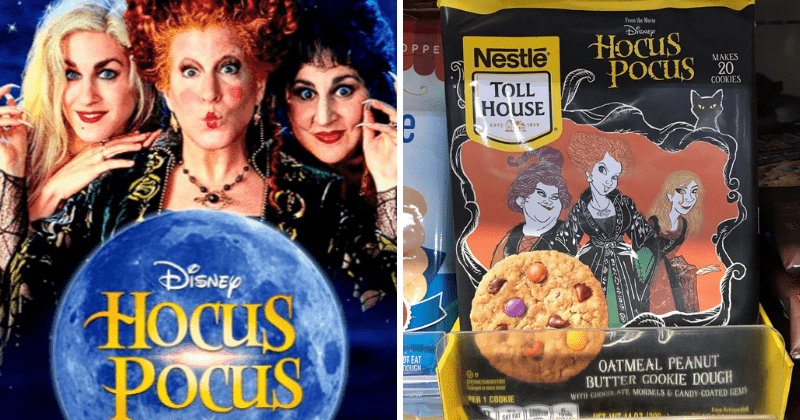 It's that time of the year when almost every other popular food brand out there will come up with their own twist on the flavored cookie doughs. Since August is already on us and Halloween is fast approaching, much of the fresh products will circle around the spooky festival. And now, it appears like Nestle Toll House is ahead of the curve at the moment and has unveiled their entry into the world—a Hocus Pocus-themed cookie dough selection. According to Delish, this latest news is definitely not a hoax and is in fact available across many stores already.

The new product, spotted by Instragammer @tamisclock, is available for you, ready-to-back in your grocer's aisles in 14-oz packages. You will find inside an oatmeal peanut butter cookie dough with chocolate bits and candy-soaked gems. From what we've seen on the package and the cookies the Youtuber has baked, we can see yellow, purple, and red gems on top. And, as you've already guessed it, these color gems pay homage to the lovably evil Sanderson sisters, a la Sarah, Mary, and Winifred.

So, are you ready to let the immortal siblings cast a spell on your taste buds? Well then, you would be interested to know the package allows you to bake 20 cookies so it's plenty for everyone around the house. In case you are counting your calories, you'd probably wish to know that each cookie will be 90 calories. There's only one downside to this, the warning on the package which points against consuming the dough raw. People are already clamoring to get their hands on these delicious treats already. Responding to TamisClock's post, Natalia_albores commented "Oh my! Oatmeal and peanut butter in one cookie?! That sounds delicious." There were others in the comment section as well and they wanted to know where they could find them. And if you're one of those, you can find them at a Meijer and Walmart near you.

Hold on, that's not all the Hocus Pocus news there is. According to Variety, a sequel to the 1993 classic is already on the cards. Adam Shankman has been roped in to direct the film while Workaholics writer and co-producer Jen D’Angelo helming the script while Lynn Harris is set to produce. At the moment, there are still doubts over the cast with the original trio of Bette Midler, Sarah Jessica Parker, and Kathy Najimy not yet associated with the movie. However, sources have confirmed to the outlet that they could make a comeback to reprise their roles 27 years on. So, a complete reboot is not yet on the cards.

As to the original, Hocus Pocus took the tale of three witch sisters from Salem who were cursed in 1693 and were resurrected by an unsuspecting boy whose family moved to Salem from Los Angeles. The witches begin their reign of terror as they get used to a 20th-century world and soon realize Halloween has turned into a major festival. The movie made $39 million on a budget of $28 million and wasn't exactly considered a box office success but it has since gained a cult following of sorts once DVDs and streaming platforms picked up on it. Currently, it is one of the most-watched movie, particularly around Halloween.