According to NASA, "Juno will improve our understanding of the solar system's beginnings by revealing the origin and evolution of Jupiter." 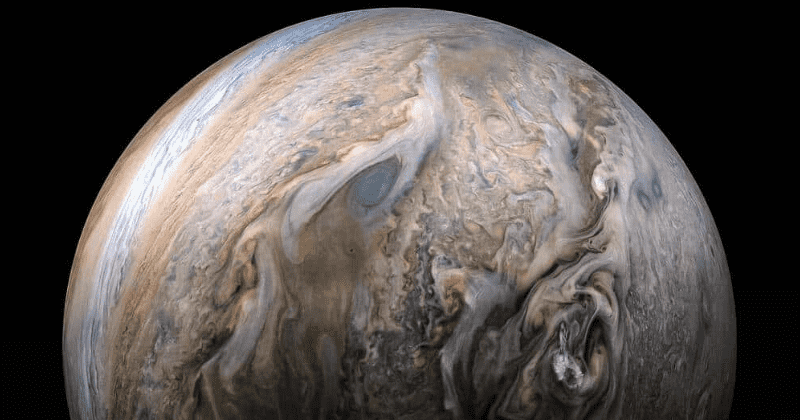 NASA  recently released a series of stunning photos taken from the Juno spacecraft that is orbiting Jupiter. The captivating display of the stormy southern hemisphere of the planet which exists 484 million miles away from us makes us realize how tiny we really are in the grand scheme of things. Juno has been taking photos of Jupiter since its very first close pass by the gas giant back in 2016.  Let's take a look at these amazing pictures.

The Juno spacecraft was just a bit over one Earth diameter's distance from Jupiter when it snapped this mind-blowing, color-enhanced perspective of the planet's turbulent atmosphere.

There is a whole host of raging clouds in Jupiter's varying North Temperate Belt. There appear to be several bright-white "pop-up" clouds alongside the iconic anticyclonic storm which is known as a white oval.

This is a shot of a chaotic, stormy area of Juno's northern hemisphere known as a folded filamentary region. It was captured during its 24th close flyby of the planet.

This rendered image shows the swirling cloud formations twisting about the south pole of Jupiter looking up toward the equatorial region.

Juno got a unique shot of Jupiter's tumultuous northern regions during its close approach to the planet on February 17, 2020.

Here are Jovian clouds in striking shades of blue in this lopsided view.

This image shows one of Jupiter's volcanically active moons (Io) cast its shadow on the planet. It bears a resemblance to solar eclipses on the Earth.

This is yet another depiction of Jupiter's turbulent southern hemisphere as the Juno spacecraft captured this on a close flyby of the gas giant on December 21, 2018.

Here you can get a striking view of Jupiter's iconic Great Red Spot just above its tumultuous Southern hemisphere.

This image shows an area within a Jovian jet stream with a vortex that has an intensely dark center. There are other features closeby which display bright, high altitude clouds that have puffed up into the sunlight.