"I feel like people in Europe and the rest of the world look at America and think: ‘What the f**k are you guys doing over there?" he said in an interview. 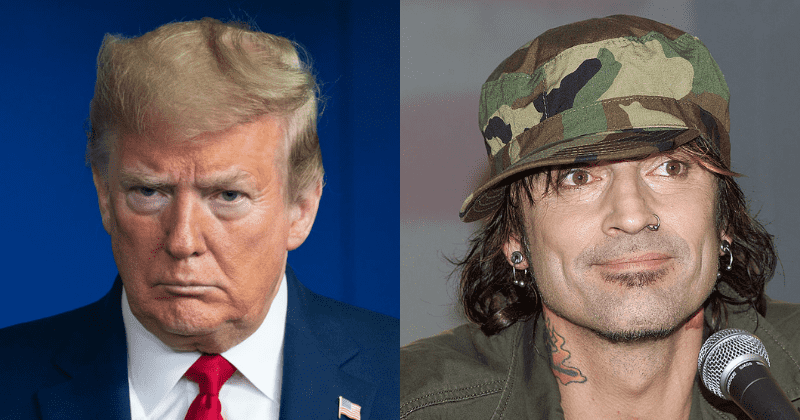 The showbiz world has very little sympathy or patience for the United States President Donald Trump with Tommy Lee, the drummer of the heavy metal band Mötley Crüe, being one of his many outspoken critics. And now, the 58-year-old musician has said that he will straight-up move out of the country if Trump wins the election in November. Speaking to The Big Issue, a UK-based magazine ahead of his album release, Lee said he'll go back to where he was born if the leadership remains the same in less than a month's time."Dude, I swear to god if that happens then I’m coming over to visit the UK. I’m out of here," Lee said. "I’ll go back to my motherland, go back to Greece, and get a house on one of the islands."

Lee has spoken out several times against Trump since he took over the presidency in 2016, with the most recent admonition coming soon after the first Presidential debate where Trump refused to call out white supremacists and instead asked them to "Stand back and stand by." The drummer also took to Twitter when Trump and the First Lady tested positive for the coronavirus and wrote: "Can you say “Karma Gods have spoken?"

Yeah and YOU refused to condemn Racism you fuckin racist!!!!! I have great idea... How about next time your mics get shut OFF when people have their 2 minutes to talk without your 7 yr old interruptive tantrums!!!!

Lee believes that Trump has time and again made America look bad in front of other countries. "The thing that stings the most is that I feel like we’re embarrassing," Lee added. "I feel like people in Europe and the rest of the world look at America and think: ‘What the f**k are you guys doing over there? Stop voting for celebrities and get someone real to run the country.'”

The drummer then answered questions on what he feels about the upcoming elections, during which he went on to call Trump a "f**king moron". "Oh man, it’s so weird because our options aren’t great either way," he said. "The guy who is our president now is just doing a fucking horrible job and he’s a f**king moron. But at some point you’ve got to cut your losses: is this at least better than what we had going on? That’s sad when it is the only option that we have." Previously, Lee had also slammed Trump for his blatant mishandling of the pandemic by retweeting an open letter directed at the president written by Craig Alan Wilkins.

Despite the extremely tense political climate in 2020, the pandemic, and subsequent delays to his band's stadium tour, the rockstar says he can't wait to get back on stage to play new music in front of an audience. "I can just imagine what it’s going to be like being on stage with that many people and that energy when it’s OK to be together again," he said. "It’s going to be priceless – that kind of energy I’m probably never going to see again in my lifetime. Can you imagine what that’s going to be like?”  Lee's latest album, which will be the band's 10th studio album overall, is titled Andro and is set to release on October 16.

"It’s going to be priceless – that kind of energy I’m probably never going to see again in my lifetime." Think you can't wait to go to a gig again? That's nothing on @MrTommyLand https://t.co/BZoP5Wz6zV

According to CNN, he's just one of the many musicians to stand against Trump and his policies. Other notable members of the rock and metal community include Dee Snider, frontman for Twisted Sister, and a former participant of Celebrity Apprentice, who derided the current president for his role in handling the pandemic. Meanwhile, several artists such as Steven Tyler of Aerosmith and Neil Young have strictly told Trump not to play any of their songs at his political rallies, citing ideological differences.

Bruce Springsteen went as far as writing a song that was a protest against Trump, titled "That's What Makes Us Great", a reference to the president's oft-quoted slogan "Make America Great Again".