The turtles are being looked after by the Stockton University's Vivarium in collaboration with The Wetlands Institute. 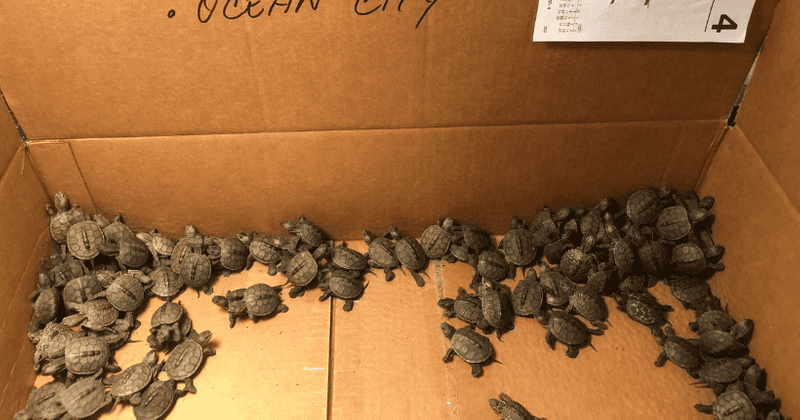 Over 800 turtles that were in storm drains in New Jersey were rescued by local residents and are being looked after by a university. They will stay there for a while before being transported to their natural habitat. Diamondback terrapin turtle babies are not an uncommon sight in Ocean City and locals, Marlene Galdi and Joanne Freas, regularly look for them to give them a hand in their journey towards the ocean. But the sheer number of terrapin turtle yolk sacs they found in the drains shocked them. In Ventnor and Margate, it was the same for Evelyn Kidd and her friends. All of these were scooped and were taken to the Stockton University's Vivarium where they being care for in collaboration with The Wetlands Institute.

The university put up pictures of the rescue on its Facebook page and wrote, "In the past few weeks, Stockton University's Vivarium has welcomed Diamondback terrapin hatchlings that hid from the winter temperatures underground in their nest chambers. These spring emergers that survived for months off of their yolk sacs were scooped out of storm drains...When a baby terrapin successfully crawls across the street, they can meet yet another obstacle--the curb. One day, the women (Marlene and Joanne ) discovered that curbs aren't the only obstacles for the quarter-sized turtles. They are small enough to slip through the cracks of storm drains." On how they came across the find, Marlene was quoted saying, "As we passed the storm drains, we noticed that there was activity in them."

She added, "When we looked closer, we saw that there were baby terrapins swimming in the storm drains." The rescuers had to use their ingenuity in the rescue. They crafted a scooper from a "telescopic aquarium net attached to a bamboo pole" which they successfully used. Evelyn, a Stockton alumnus, has been rescuing terrapins with her brother for years. She has even recruited the help of local kids in her neighborhood after she trained them. "In the coming weeks, more terrapins will be arriving from a conservation partnership with The Wetlands Institute in Stone Harbor that extracts and incubates eggs from road killed females," the post added. Regarding the future of the rescued turtles, the university stated, hatchlings would spend about a year with them "under optimum growing conditions to give them a head start."

Then they will be released "back into the wild." This is, however, not the first time the university has rescued members of this turtle species. The post added, "To date, there are 1,108 terrapins receiving care at Stockton. The 826 new rescues join last year's rescues and head starters raised from road-killed females and eight non-releasable adults (all from longterm captive situations)." For those who want to also engage in rescuing these creatures, the university also has given instructions. At the Vivarium in Stockton, the turtles will be under the care of John Rokita, assistant supervisor of Academic Lab Services, along with his staff. Explaining the spring emerges, he told the university's website, "Eggs laid later in the year hatch out underground and spend the winter in the nest chamber surviving off their yolk sac."

More than 825 baby diamondback terrapin turtles rescued from New Jersey storm drains have made their home at Stockton University in recent weeks! 👏🐢 https://t.co/DziwtNrJSk

He added the warmth of spring awakens the tiny terrapins, after which their perilous journey begins. The turtles come in with some problems since the storm drains are not an ideal habitat for them. Rokita added, "A good percentage of the terrapins that do come from storm drains have eye infections. They haven't been in the cleanest water because everything runs into the storm drains." These will be isolated from the healthier population until they are fit. He also said predators may also posed danger. "The water goes out into the big open bay, and they are little turtles. They are just like fish food out there," said Rokita.