A 'Ms. Monopoly' Exists And It Celebrates Female Entrepreneurs By Paying Them More Than Men

The new version of Monopoly also marks the first time in game history where a new mascot features on the cover. But what does this only happen in a game? 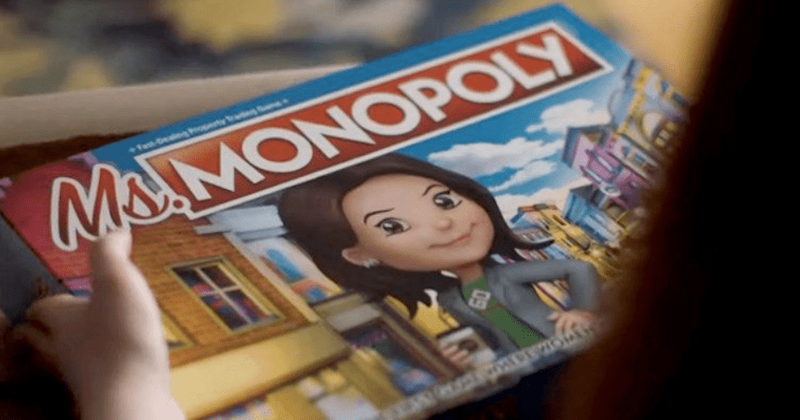 A new version of Monopoly that highlights and celebrates female entrepreneurs is coming to stores this month. In Ms. Monopoly, instead of buying and selling properties, players invest funds in inventions originally invented by women - such as chocolate chip cookies and wi-fi. That's not the only twist in the game: women players also get a higher payout at the start of the game, and collect more money than men when they pass Go. The idea, according to parent company Hasbro, is to create a game that overturns the current status quo by making women earn more than men. The company explained in a statement that Ms. Monopoly is "a fun new take on the game that creates a world where women have an advantage often enjoyed by men." The statement adds,"But don't worry, if men play their cards right, they can make more money too."

The new game also marks the first time in Monopoly history where a new mascot features on the cover."Ms. Monopoly marks the first time in the game’s history where a new mascot will grace the cover," Hasbro said in a statement to Good Morning America. And while Mr. Monopoly is a real-estate maven, Ms. Monopoly is an advocate whose mission is to invest in female entrepreneurs." To celebrate the launch of the game, Hasbro surprised a group of female inventors with $20,580 in actual money to go toward their projects, Good Morning America reports: the same total amount featured in a typical Monopoly game. The funds were awarded to 16-year-old Sophia Wang, who invented a device that can detect sinkholes before they happen, 13-year-old Gitanjali Rao, whose invention helps detect lead in drinking water, and 16-year-old Ava Canney, who invented a spectrometer that measures the amount of dye in candy and soda.

Women will collect 240 Monopoly bucks when they pass “go,” while men will get 200: https://t.co/1ZLiRhmqvm pic.twitter.com/N58lmAbfGe

However, while Hasbro's idea for the game seems well-intentioned, certain aspects of the execution are already garnering criticism. Several Twitter users immediately pointed out that the game was originally created by a woman, but was eventually credited to a man. Others took issue with the game's mechanic of women making more money than men based on gender, saying that that was not the goal of a gender-equal society. "Women don’t need constant reminders of our lot in life or to be told we only won because the rules gave women an unfair advantage—we get enough of that at work," writes Kim Elesser in a piece for Forbes. "Just the fact that women need their own version of Monopoly is sad statement. Why can’t we just compete on an even playing field with men, like in the traditional Monopoly."

Parker Bros: Rejects Elizabeth Magie's pitch for The Landlord's Game in 1909. Buys her patent decades later for $500 so they can bury it in favor of a similar game "invented" by a man, which praised capitalism instead of critiquing it. What a woman-friendly legacy, Ms. Monopoly! https://t.co/PVCXqYQJeX

A woman came up with the idea for 'Monopoly,' but a man took credit and profited from it. https://t.co/up5Jtkzukr

Ms. Monopoly retails for $20 and hits stores, including Walmart, in mid-September.