It is said that this incident occurred in Indonesia, and that it was possibly some form of street entertainment. 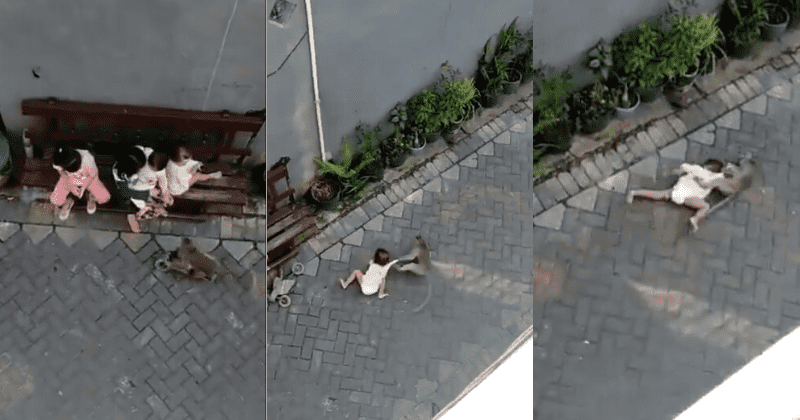 A bizarre video doing the rounds on the internet where a monkey rides a tiny bike in what appears to be an apartment complex and then attacks a toddler nearby and drags her for quite a distance has baffled people. There is a lot to process in the 13-second clip that was uploaded on Reddit and subsequently on other social media platforms. The video is shot from the balcony of the house and at first, seems more or less harmless. The monkey is seen riding rather speedily on a tiny motorcycle from one end with a handler at the back. Things go well for a few seconds and one even begins to marvel at the skill of the animal for a while. But then it takes a turn for the worse. The monkey jumps off the bike and hops on a bench that is occupied by a baby girl wearing a frock, an older girl, and a mother carrying an infant.

So much is happening in this video that I don’t even know where to begin. Like what type of beef does a baby have with a monkey that it pulls up in a scooter and drags you into on the floor like that. 😭😭😭😭💀💀💀💀💀 https://t.co/U6C7FJBqa4

The animal targets the helpless child who is first dislodged from the bench. It then knocks the baby girl off the bench, and runs away momentarily, only to return and drag the toddler for a few meters.  People around are shocked at the sheer audacity and aggressiveness of the creature. A man shouts from his balcony in an attempt to scare it away, and another man appears on the scene gesturing what appears to be at the handler. Probably scared at the shouting and the commotion, it lets go and runs away. Luckily, the child escaped unscathed and gets up immediately.

It's uncertain where the clip originated from, people who left comments on the video, state that it occurred in Indonesia. According to local media, the video was taken by a person named Jasa Supanji, reports The Sun. It added that the animal might have been some form of street entertainment. This clip left people divided. Some blamed the monkey claiming that it was annoyed at having to perform tricks and perhaps had a moment. Others believed that the animal was not to blame. rustyshackleford193 attempted to explain things: OK so what really happens is those monkeys get put on a toy bike (that doesn't have an engine) and a collar with a rope on it. The owner then yanks the cord so the monkey flies from one end of the street to the other while steering. Pretty cruel and that's probably why the monkey is so strung out.

The Redditor added: You can see the owner trying to pull back on the cord and he pulls the monkey while it hangs on to the kid, and in the start yanking the cord to propel the bike. Another Sir_Martinelli also wrote in defense of the animal: Its a trick. Look closely at the beginning top of the video. The money gets on a bike and the owner yanks on his collar and sends him down the alley. The monkey is supposed to turn around before the owner yanks him back but its pissed and attacks a child, so the owner pulls the monkey back and it brings the child. He was filming the monkey show.

There were others who pointed out that the adult near the kid did not come to her rescue. frussia noted:  The mum sitting on the bench doesn’t give a f**k that her baby is getting kidnapped by a monkey.