Woman's Husband Cheats On Her While Pregnant With 3rd Child, Puts Entire Blame On Her

When she confronted him, he instead blamed her for the deterioration in their marriage. 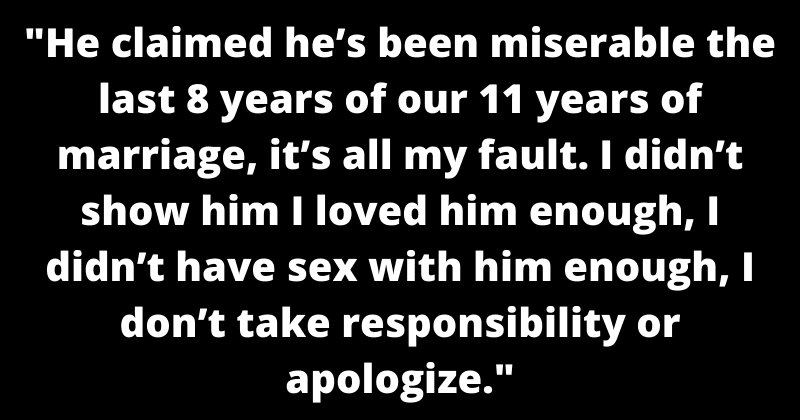 A woman who posted about her ordeal of dealing with her cheating spouse will one will make anyone's blood boil. Posting on Reddit, the woman asked for advice on how to deal with her partner who cheated on her while she was pregnant with their third child at the time. It was hard enough giving birth to a baby and to know that the person was supposed to be your support at such a time was out enjoying himself with another woman left her broken. But the signs were all there, and he had been a "distant partner" for years despite them already having two children before wrote the woman. He was also not helping her out much during her pregnancy. But never did she imagine he would so cruelly do what he did.

"It’s been a very tough pregnancy. Every time I was admitted to the hospital during this pregnancy, he wouldn’t come. I drove myself to the ER and drove myself home. I took myself to my doctor appointments. Tuesday of last week at 34 weeks pregnant I was admitted for high BP, then sent home to do a urine catch. Husband had planned to go out of town. I asked him not to go, but he went anyways. Wednesday I was admitted - I told him, nothing. I called him Thursday saying he needed to come home, they’re going to have to deliver the baby, I’m really sick....he was golfing. He said he would leave that evening. He claimed he fell asleep for 5 hours on the way back in a gas station but should have made it to the hospital by 1am that night. Friday still no husband. He got there maybe two hours before the baby was born at 1:38 pm and left after," she wrote on June 15.

She also highlighted he had never been a "very supportive partner" and visited her and the kid twice after birth while they were still in the hospital, which hurt, but it was nothing compared to what she would find out later. "Sunday morning I was in the NICU (neonatal unit) and couldn’t get ahold of him, I checked the monitor and my 18 month old was still in her crib. He slept in and left her for three hours in her crib waiting. I had to call the neighbors to go wake him up. He left the hospital at 12:30 am but apparently didn’t go home until about 3am that night. So I asked to be released home early from the hospital so I could care for my kids at home," she wrote. Back at home, she was left alone. He claimed to go to the NICU to see the baby.

He had been coming home very late for a few days, each time making up different excuses and not responding to texts. Then one day when he was asleep she saw his phone unlocked. "I don’t know what made me do it, I’ve never looked at his phone before, but I looked and it was all right there. Texts between him and her. Telling each other “I love you”, him calling her baby. Him complaining about me asking him to pick up my antibiotics for my kidney infection or how I had him doing errands, he misses her, can’t wait to see her," she wrote. All this while, when he went missing from home and even was irregular at the hospital, he had been with her. When confronted he said he had been miserable for the last 8 years of our 11 years of their marriage and even had the audacity of blaming her for it. He asked him to leave the home owned by her.

"I didn’t show him I loved him enough, I didn’t have sex with him enough, I don’t take responsibility or apologize. So I asked him to leave. He packed his things. I assume he is staying with her. I’ve taken him to couples counseling because I was miserable, how did he never mention how unhappy he was all those times?? I wanted a partner. I wanted someone to be collaborative and kind, and I got shut down for years. But I was okay to tough it out because the idea of breaking up my family was too painful to even consider," she wrote. She found out the other women was a mother of four kids herself and lived just two miles away from their house. She had even met her before and knew everything going on. "What kind of person cheats while their pregnant wife is sick and in labor, or uses the NICU as their cover story for spending the night with someone, and what kind of woman is okay with that?" she asked, while adding, "My heart is broken. I know he was never a good partner or parent but I didn’t want this."