Mom Tries Strangling Her Two Kids Because She’s A 'Bad Mother': "I Cannot Take Care Of My Kids"

The father of the children, who also lives at the same home, was at the store when Hina Sadia attempted to kill their children. 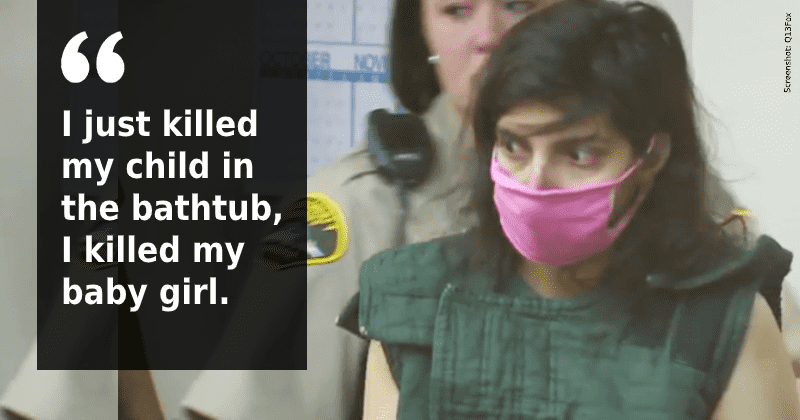 A young mother confessed that she had tried to strangle her two children because she considered herself a 'bad mother.' Struggling with the pressure of motherhood, Hina Sadia, 31, tried to strangle her children aged 2, and 4. Officers with the Fife Police Department said that Sadia had tried killing her four-year-old daughter before calling 911 and telling them that she had killed her daughter. "I just killed my child in the bathtub, I killed my baby girl," she told the emergency helpline before adding that she was going to kill her two-year-old "baby boy," reported The Daily Mail. When the authorities asked her why she tried to kill her children, the despondent mother said, "I am a bad mother and I cannot take care of my kids." The children's father, who lives at the same home, was at the store.

According to reports, Sadia first choked her son first. but changed her mind and decided to kill her daughter first. Emergency responders rushed to her home in Fife, Washington, and found her front door locked and they could hear Sadia crying. A child could be crying inside the home. Sadia eventually opened the door for the dispatchers, who searched the house looking for the two children. They were found naked and wet in a bathtub in an upstairs bathroom. The four-year-old daughter was "limp and not moving" while her two-year-old brother was "sobbing and crying" by his sister's feet. Emergency responders immediately got down to reviving Sadia's unconscious daughter. "She was not responsive upon initial contact and they began life-saving breathing medical attention until Tacoma Fire arrived on scene and took that over," said the Assistant Chief Dave Woods with the Fife Police Department, reported Q13Fox. The two kids were then rushed to Mary Bridge Children’s Hospital, where the young girl remains in critical condition while the boy is stable.

Hina Sadia was arrested and charged with two counts of murder and is being held in jail on a $1million bond. Motherhood is certainly not easy and the pressure that comes attached with it can often be overwhelming. Prosecutors claimed that she told "detectives she could not do anything for her children, and they were not going to contribute to society, so it would be better that they die, and she decided to kill them." The authorities have launched an investigation into the matter and stated that they were yet to arrive at a motive behind Sadia's attempt to kill her children.

"It’s baffling to us, it’s baffling to our investigators, it’s baffling to the father at this point. We aren’t sure why it took place,' said Woods. “Its impact is not on just the family, but the community and our police department,” Woods said, according to KOMO News. “In my 32 years in law enforcement, we’ve never experienced anything like that in our city.” Sadia has no previous criminal history. She appeared in Pierce County Superior Court and said that she was failing to do anything for the siblings, according to the court records. Neighbors said the couple was relatively quiet and many didn't know the pair even had kids.

It's not easy to cope with motherhood, especially with women facing so much pressure to be a 'good mother'. The expectation can often make parents feel like failures when they are unable to protect or provide for the child. While it's common to feel 'baby blues' after the birth of a child, this can also translate into a severe, long-lasting form of depression — postpartum depression which Mayo Clinic says can include mood swings, crying spells, anxiety, and difficulty sleeping.