The young mother highlighted the unfair laws that enabled restaurants and bars to pay workers less than the minimum wage. 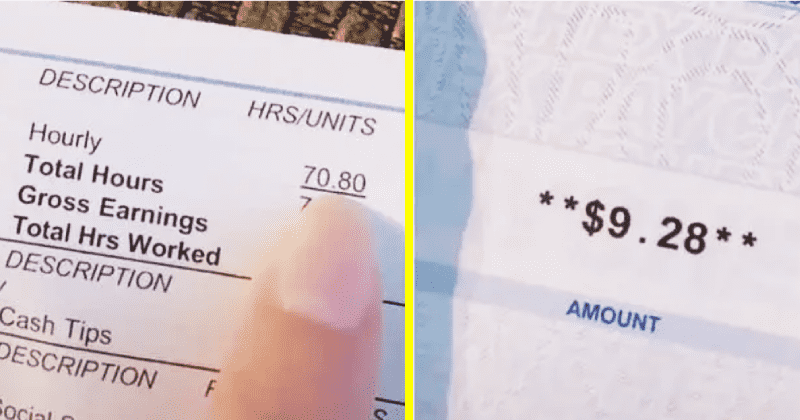 The US Service industry, like most in a capitalist system, is skewed to benefit the employer and not the worker. Many bars and restaurants avoid paying the minimum wage by counting on customers to compensate for the bartender/waiter's wages with tips. Aaliyah Cortez has been a bartender and server at a Texas sports bar and is aware of the practice and decided to shed light on it. Aaliyah Cortez created a TikTok video that showed her receiving just a paltry $9 for over 70 hours of work.

In the video, Aliyah shows that she had received a total of $150.81 in hourly wages for 70 hours of work at $2.13 an hour. She was only left with $9 after medicare, taxes and social security. She had received close to $700 in tips and it reflected in her poor daily wages. Establishments are able to keep her daily wage so low because of the tips she received. A restaurant needs to supplement the tips if they don't make up for the difference between the tipped minimum wage and the regular minimum wage.

As per the law, employees who get at least $30 per month in tips only need to be paid $2.13 an hour by their employers. If the total of the server's tips doesn't average $7.25 per hour, the federal minimum wage, employers will be required to make up the difference. Instead of raising the price of food to pay workers a decent wage, the restaurant/bar owners pay a pittance while shifting the cost of labor onto the customers altogether. This makes servers entirely dependent on tips to get the daily wage. The whole practice of tipping is meant to be in addition to the wages they are paid.

"There are laws set up that allow tipped employees to be paid under the federal minimum wage, which makes us rely on the customer to pay our wages. It’s not right that we have to do this, but I wanted to shed some light on the issue and inform the public about the importance of tipping, Aaliyah told Buzzfeed. "If I had a good two weeks from tips my check will be on the lower side. At my last restaurant, my checks would come out to be $0." Aaliyah loves her job but said she would prefer one in which she didn't have to rely on tips from others. "I just wish we were all being paid adequately and consistently. As you can see – by my check – I cannot afford to live off of $2.13 an hour, so I solely rely on the generosity of my customers."

It’s the customer’s choice to tip. Tipping is a privilege not a necessity.

"I am fortunate to get by with this, but it’s tough to think that if an emergency comes up, it could hurt me financially,' Aaliyah, a concerned mother, told The Daily Mail. "When it’s a slow season for the restaurant, everyone suffers."

these replies are exactly the problem.

y'all love blaming minimum wage workers instead of the REAL PROBLEM ⚠️

The problem is, it shouldn’t be on the customer to begin with, it’s an excuse for restaurants to get away with starvation wages.