"Please keep your mouths/breaths away from a baby's face, hands, and feet. Don't be the reason a baby is hospitalized (or dead)," wrote Ariana DiGrigorio. 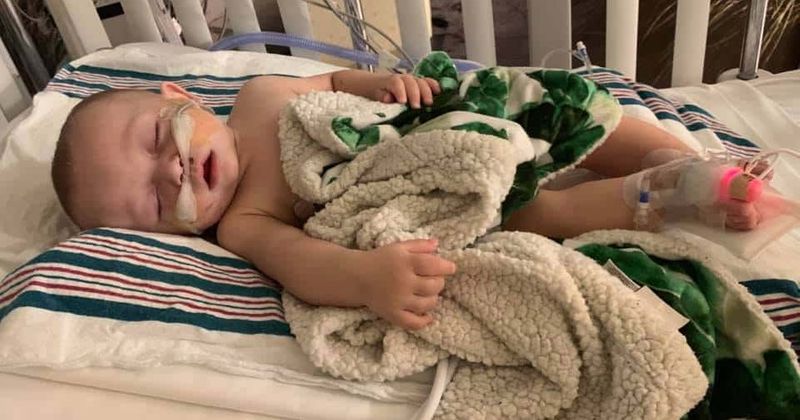 A concerned mum whose son was hospitalized due to a respiratory virus is warning sick people to keep away from babies during flu season. Ariana DiGrigorio of Keansburg, New Jersey recently shared a photo of her then 8-month-old son, Antonio, plugged into a breathing tube in a hospital crib to warn others about the dangers of respiratory syncytial virus or RSV. According to the Mayo Clinic, the virus causes infections of the lungs and respiratory tract. "Adults- you are contagious up to 24 hours before you start showing symptoms! Please keep your mouths/breaths away from a baby's face, hands, and feet," DiGrigorio wrote. "Don't be the reason a baby is hospitalized (or dead) because the baby was "just so cute I had to kiss her!"

DiGrigorio told Good Morning America that her son, now a year old, was diagnosed with the flu in December 2018 after his daycare center sent him home with a fever. She brought her child to the hospital, where tested negative for RSV. But two months later, Antonio still had flu-like symptoms, prompting another visit to the hospital. In February 2019, Antonio tested positive for RSV. "It was scary," DiGrigorio recalled. "Before he was transferred into the ICU he was in a regular room and he went into respiratory failure. They said he was doing better with Albuterol breathing treatments they were giving him and then it went downhill from there." The concerned mother suspects that Antonio caught the flu from his daycare center and that his condition deteriorated from there.

Dr. Saumya Bhutani, a resident in ABC News' Medical Unit, explained that while children have been infected by RSV by the age of 2, the virus can also infect adults. "RSV is most common from December to March," Bhutani told Good Morning America. "It is very contagious and kids can get it from 'respiratory droplets,' basically meaning from the droplets of someone's cough or sneeze, whether those droplets directly get into a child's mouth, eyes, or nose or the child touches surfaces like tables, cribs or toys that have those droplets on them." She added, "Thus, daycares have the potential to be large breeding grounds for the infection," noting that RSV rarely results in the death of the child unless the illness is complicated by other medical conditions.

According to the Center for Disease Control, people with RSV are usually contagious for three to eight days. "However, some infants, and people with weakened immune systems, can continue to spread the virus even after they stop showing symptoms, for as long as 4 weeks. Children are often exposed to and infected with RSV outside the home, such as in school or child-care centers. They can then transmit the virus to other members of the family," the CDC website states. "RSV can survive for many hours on hard surfaces such as tables and crib rails. It typically lives on soft surfaces such as tissues and hands for shorter amounts of time." According to the CDC, premature infants, young children with congenital heart or chronic lung disease, young children with compromised immune systems due to a medical condition or medical treatment, adults with compromised immune systems and older adults, especially those with underlying heart or lung disease are at highest risk for a severe disease due to RSV. DiGrigorio's Facebook post was meant to spread awareness and remind adults to stay away from babies when they're sick, and was shared over 20,000 times. "I wanted to spread awareness of the seriousness of RSV, plus I just had another baby son am trying to prevent what happened to Antonio from happening to him," DiGrigorio said.