Interracial couples expecting twins have a 1 in 500 chance of having children who will be born with different skin colors. 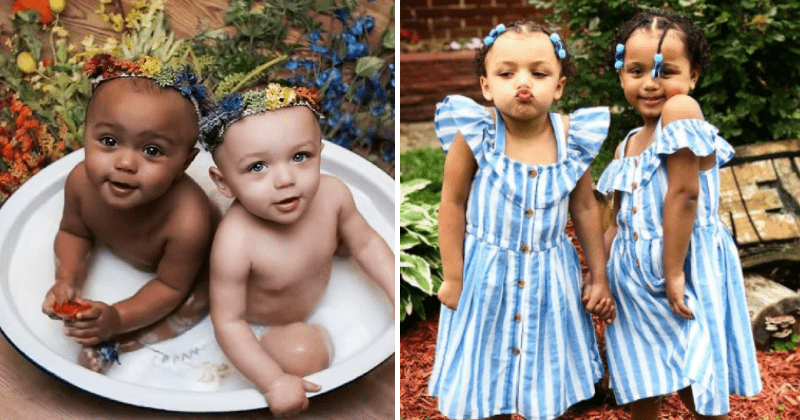 When 5-year-old Kalani and Jarani Dean stand next to each other, it's hard to tell they are twins. Kalani was born with light skin and blue eyes like her mother, while Jarani was born with darker skin and brown eyes, like her father. It's very rare to see children with mixed-race parents get the skin-tone color of just one of their parents. BBC reported that the chances of interracial couples expecting twins have a 1 in 500 chance that their children will be born with different skin colors. Tomas Dean and Whitney, the twins' parents were just as surprised when they saw the twins for the first time on April 23, 2016. "Kalani was as white as can be. I was just in denial because you know the odds of this? I would never think I would have a black and white twin. That's why I asked if she was albino because she was just so white," said Whitney, reported TODAY. The kids' mother is hoping they become a symbol against racism.

Tomas thought their skin tones would change with time. "I was like, 'Yeah, she's a little light,' but I thought maybe babies are that way when they're firstborn. But then a couple of minutes later, her sister came out a little darker. In a million years, I never thought I'd have a girl with blue eyes. I didn't think I could pull that one off! I hope that a lot of people can see that color really isn't a big thing. What's important is love. Mysterious things can happen and life is a blessing," said Tomas. “One time Tomas and I went out to eat and our waitress thought Jarani was his and Kalani was mine,” Whitney Meyer told Us Weekly.

Despite having contrasting skin tones, they have similar facial features including their smile but the color of the twins throws people off. The twins' mother said Kalani looks much like her older Caucasian brother, Talan, while Jarani looks like Meyer's 2-year-old son, Pravyn, who had tragically drowned. The twins are two years younger than Pravyn.

There are so many genes that determine skin tone and eye color, and it's still a mystery to scientists how genes interact with each other. “The physical traits you can see in a person are just a very small sliver of the genetic diversity across human populations,” said Dr. Bryce Mendelsohn, a medical geneticist at the University of California, San Francisco. “A lot of times we only focus on the things our eyes can see, but what we see is a tiny tip of the iceberg of the actual genetic diversity in everyone.”

Khristi Cunningham of Ohio, who also has twins with different skin tones, warns there's going to be a lifetime of explaining to do. “Get ready for a lot of conversations with strangers!" was the message Cunningham had for Whitney and Dean. Cunningham wanted to share her children's story in the hope of battling racism. "We did feel that we were obligated to share our story with others. We felt we were given these two beautiful children for a positive purpose — that purpose was to educate those who are ignorant to the fact that these things are possible, and to initiate a conversation on race in America," she told TODAY. Cunningham said it was important to look past skin color. "It is only by chance we are brown, or black, or white," she said. Tomas Dean echoed her words, "I hope that a lot of people can see that color really isn’t a big thing. What's important is love," he said.