She pushed him around in a customized rig and despite getting tired, continues to push in the directions her son points. 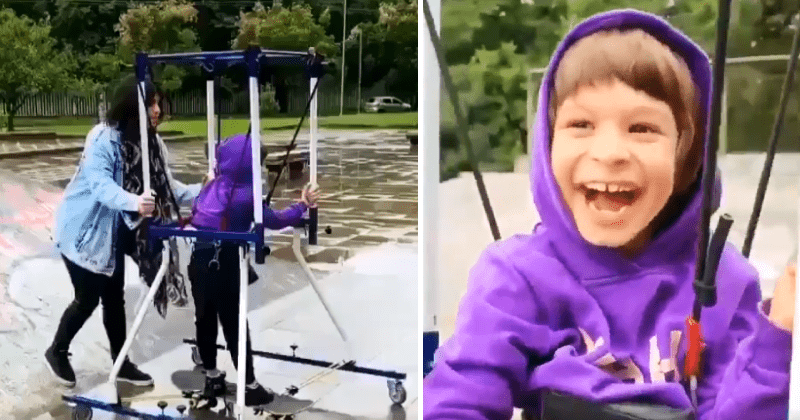 A heartwarming video of a 7-year-old child with cerebral palsy, skateboarding for the first time with the help of his mother is going viral on the internet. The video shows João Vicente fastened to a rig with his feet on a skateboard and his mother pushing him around. João's mother Lau Patrón doesn't stop at pushing him on flat surfaces and helps João navigate the steep ramps, and at speed. Despite tiring herself out, João's happy expressions keep her going. João has cerebral palsy after he suffered a stroke at the age of 1 year and 8 months. His mother, Lau Patrón, posted the video of her son skateboarding for the first time and wrote a long post on the life and dreams of her son.

The boy's mother wrote about how one of her son's dream was to skateboard. "My son is 7 years old. He is a boy full of wills, desires, and dreams. And one of the dreams, for a long time, was to skateboard." Lau Patrón opened up about how the world constantly reminds kids like João Vicente about his condition. Lau Patrón wants her son to express himself and pursue his dreams actively. "For children who have cerebral palsy or any other kind of disability, having desires and dreams is not allowed. The world is always telling us no. We must not, we cannot, it will not work, there is no adaptation. We do not belong." wrote Lau Patrón.

He has Cerebral Palsy and wanted to skate board so his mom created this for him so that he could.

Mother Of The Year pic.twitter.com/S97bk8jBAS

João Vicente's condition meant that skateboarding wasn't a possibility. João's mother was determined to fulfill his dream and went to great lengths to help him realize it. She tried to help him skate using a walker, bike and more, but it just didn't feel the same. She even attempted to electric double skate holding her 7-year-old but it wasn't easy. She doesn't recommend others try it either, "I do not recommend it to people who, like me, trip on their own feet," wrote Lau Patrón.

She then came across Project Skate Anima, an initiative by Steven Pinto and Daniel Paniagua of Studio Neuro. The duo designed a rig that helps the disabled to enjoy skating. "Both of them, a physiotherapist and a psychologist, love skateboarding, and they thought it was only fair that every child could have a chance to experience the joys of skating: the freedom, the adrenaline rush.

They invented and built a rig to do the impossible, and since then have fulfilled the dreams of many people, including that of João. These guys were restless in making a structure that makes children and young people dream, no matter who they are. Lau Patrón said the experience of watching her son skateboard had transformed the limits and boundaries of "what is normal, what belongs, who belongs, and what is possible." Lau Patrón says the experience has boosted the self-esteem of João immensely.

The video also made it to Reddit where it gained a lot of positive comments. Knowing moms, as soon as her kid showed interest in wanting to skateboard she probably immediately started doing everything possible to make it happen just to bring joy to that child, no matter how tired she gets in the process it's all worth it because it made that boy happy, wrote one Redditor. I love that she doesn't half-ass this even slightly. She goes in at a full charge and starts hitting ramps," noted another. A third stated: I love that she is winded but I think she would do that all day if her boy would just keep that laugh up.