Her 10-year-old daughter, who died of yellow fever, was terrified of storms. 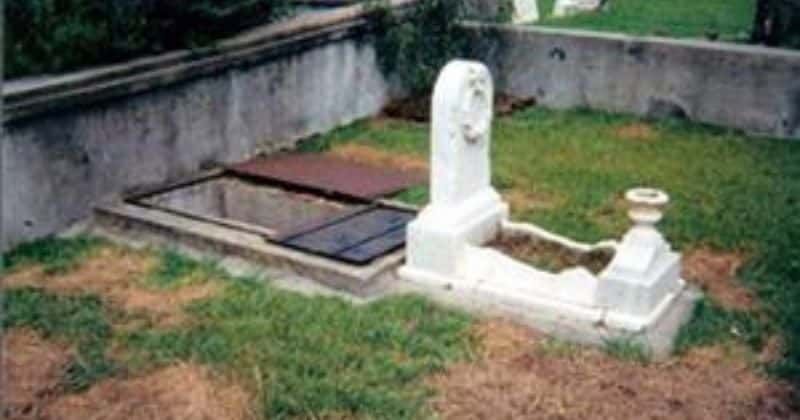 A grave in Natchez City Cemetery in Mississippi has quite a history behind it. At first glance, the grave may seem normal, however, it is anything but. In fact, this unique "thunderstorm grave," speaks of a grief-stricken mother who honored her late daughter in a one-of-a-kind way. Behind the tombstone, she built a door hiding a set of stairs leading down to the casket. The mother whose name is Ellen laid her 10-year-old daughter Florence Irene Ford to rest here. The young girl who was terrified of storms passed away from yellow fever in 1871. Ellen created a small window at the head of her daughter’s casket, and a narrow stairway built six feet under to the level of the window, reports Bored Panda. When the girl was alive, and a thunderstorm occurred, she would run to her mother, who would lovingly comfort her. So when little Florence passed, Ellen could not bear the thought of her daughter being alone during a storm. Therefore, the stairs would be a way in which the heartbroken mom could feel close to her daughter and still find a way to comfort her during thunderstorms.

The Grave of Florence Irene Ford: Florence’s mother built a stairway down to her daughter’s coffin so she could comfort her during storms. https://t.co/z0oc2av2IO via @atlasobscura pic.twitter.com/dIhtmY6EEH

Florence was born on September 3, 1861, and she died on October 30, 1871.  The City of Natchez website details Florence's story and that of her unique grave. It reads: Florence died of yellow fever when she was 10 years old. During her short life, she was extremely frightened of storms and whenever one occurred she would rush to her mother to find comfort. Upon her death, her mother was so struck with grief that she had Florence's casket constructed with a glass window at the child’s head. The grave was dug to provide an area, the same depth of the coffin, at the child’s head, but this area had steps that would allow the mother to descend to her daughter’s level so she could comfort Florence during storms. To shelter the mother during storms, hinged metal trap doors were installed over the area the mother would occupy while at her child’s grave.

It also pointed out that the trap doors behind little Florence’s tombstone, which covers the stairway can still be opened today. To avoid vandalism, a concrete wall was built at the bottom of the stairs which covered the glass window of the little girl's coffin.

This is a new one on me - the "thunderstorm grave", which a girl's mother had installed with a stairs and window(!) on the side so she could pop down and "comfort her during storms."

Many Internet users had a lot to say about this mother's gesture. Mary Lungu reminded others: As a mom whose lost a baby myself, everyone grieves differently. If this helped her cope, then there is no room to judge. Especially if you’ve never lived it. Kat Powell added: Everybody goes through grief in different ways, if this is how her mum can cope till she gets over the worst then let her have that. There is never a right or wrong, specially when it's your child.

Our #tombstonetuesday comes from Natchez City Cemetery and the Grave of Florence Irene Ford. This heartbreaking grave is a reminder of the love and protection of parents both in life and death. Check out the details below. #graves #natchezms #florencefordhttps://t.co/apdnwSoqgC pic.twitter.com/STltLH0pVw

Eileen Baker shared: Death is harder on the living. I've always said putting flowers on the graves is for the living its our way of holding on to that person and showing our love and respect for them I know my parents and sister and little niece are all in heaven. But it's my way of saying you're not forgotten. We still think of u every day we still love you .They are home they are in heaven. We are here still and it's how we cope down here. But what a reunion will have one day. Judith Evans added: It's a bit macabre but if it comforted a grieving mother so be it. It was in the 1880s so perhaps it wasn't such a.strange thing in that era.