Streetwear brand Bstroy says its hoodies are meant to be a comment on gun violence, but survivors and relatives of victims don't agree. 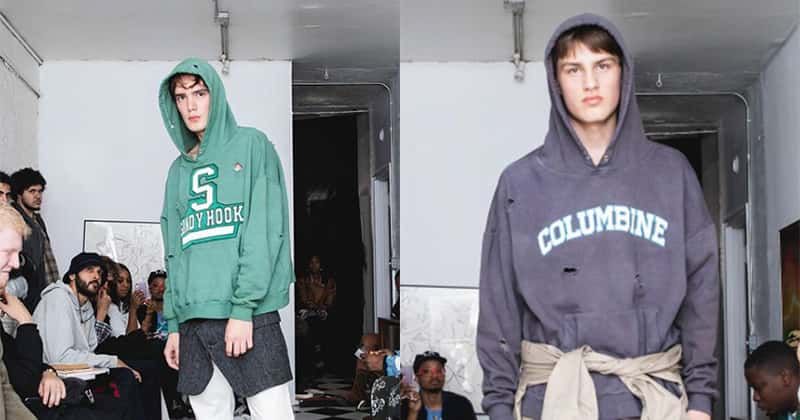 Every once in a while, there come along fashion houses who want to make a statement of some sort. Now, that statement could be delightfully tongue-in-cheek, like the Viktor & Rolf tulle dresses that graced Fashion Week in Paris this January, or they could be woefully misguided pieces that actually shouldn't exist, like, well, this. In today's edition of WTF Fashion, streetwear company Bstroy is facing backlash for their school shooting themed hoodies, displayed as part of a pop-up show at New York Fashion Week. In a year where there have been more mass shootings in the U.S than days, the company's spring/summer 2020 collection featured distressed hoodies reading "Stoneman Douglas," "Sandy Hook," "Virginia Tech" and "Columbine," the sites of four of the deadliest school shootings in the US. And by distressed, we mean that they had holes in them, made to resemble bullet holes.

Photos from the show were featured on the brand's Instagram account as well as that of the designer, Brick Owens, and immediately garnered outrage for obvious reasons. Several commenters identified themselves as survivors, or as loved ones of victims. "My dead classmates dying should not be a f***ing fashion statement," one person commented on a photo of the Stoneman Douglas hoodie. A post on Owens' Instagram suggests that the collection, titled Samsara, is meant to be ironic, but it's no surprise that most people don't see the irony in minimizing events that left children and teachers dead. "Sometimes life can be painfully ironic. Like the irony of dying violently in a place you considered to be a safe, controlled environment, like a school," reads the blurb for the collection. "We are reminded all the time of life's fragility, shortness, and unpredictability yet we are also reminded of its infinite potential. It is this push and pull that creates the motion that is the cycle of life." That hurt a little to read, honestly.

This is just absolutely horrific. A company is make light of our pain and other’s pain for fashion. Selling sweatshirts with our name and bullet holes. Unbelievable.

@bRicKOwens My 14 year old fashionista niece was murdered in Parkland. She was a professional illustrator and aspired to be clothing designer like you. You should be ashamed of taking advantage of her death to make 💰 Today, I proudly wear her designs. pic.twitter.com/j8DZ8waROe

“Under what scenario could somebody think this was a good idea?” tweeted Fred Guttenberg, whose daughter died in the Stoneman Douglas shooting. “This has me so upset.”  The aunt of a student who died in the Parkland shooting tweeted to Owens, saying, "You should be ashamed of taking advantage of her death." Bstroy is known for their off-kilter, dark designs - they once staged a show at a funeral home and claimed its clothes were designed for a post-apocalyptic world, their pieces are a mix of high-concept garments and "sly tweaks to conventional forms", according to The Washington Post. “We are making violent statements,” said Bstroy co-founder Dieter Grams. “That’s for you to know who we are, so we can have a voice in the market. But eventually, that voice will say things that everyone can wear.”

In an email statement to the TODAY Show, Owens explained, "We wanted to make a comment on gun violence and the type of gun violence that needs preventative attention and what its origins are, while also empowering the survivors of tragedy through storytelling in the clothes." He also surmised that the backlash to the sweatshirts stemmed from prejudice, since both he and Grams were young Black men. “Also built into the device is the fact that our image as young, black males have not been traditionally awarded credit for introducing avant-garde ideas,” Owens wrote. “So many people have assumed our message to be lazy just because of what they’ve been taught about black men. These hoodies were made with all of these intentions in mind, and to explore all of these societal issues.”

It's unclear yet if anyone at Bstroy consulted with survivors of the shootings or with people who had lost friends or relatives, before creating or unveiling the sweatshirts. Looking at feedback, probably not. In a statement to The Cut, Bstroy explained that while they're not currently selling the sweatshirts, that may change soon.  “The hoodies have only been shown not sold and the school shooting hoodies were initially intended to be just for the show and not to sell but that may change now,” the company said in a statement, concluding, “Art’s Job is to wring emotion out. What we do with it after is subjective and on us.”