Nathaniel Saxton was present for his virtual court hearing on possession of drug paraphernalia. He narrowly escaped a contempt of court charge for his sex-themed screenname 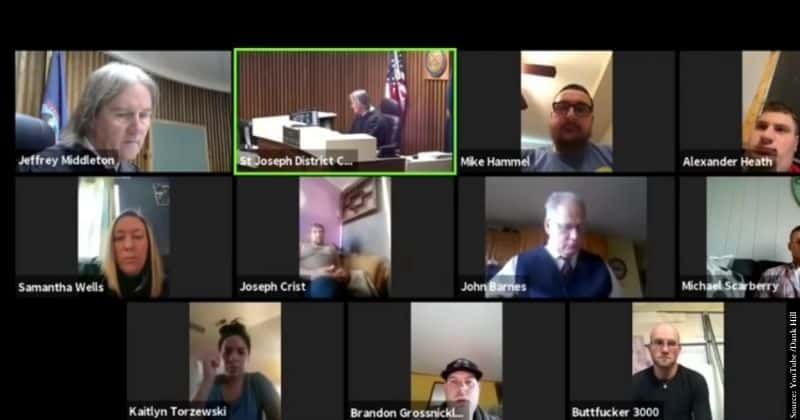 A Michigan man was nearly charged with contempt of court when he appeared for his online arraignment with the screen name "Buttf*cker 3000." Judge Jeffrey Middleton of St. Joseph County, Michigan, was presiding over the Zoom court, a video of which was posted on YouTube. "Then we’ll bring this fool in," Judge Middleton, told the other people assembled there to address the court. The man in question shortly appears online with the sex-themed username but is oblivious to it. Judge Middleton then asked him his name: "Good morning sir. What is your name." There's a moment's silence before the man realizes that the judge is addressing him. He then asks, "Me?" before answering, "Nathaniel Saxton, sir."

Middleton then pointedly questions him, "Your name's not Buttfucker 3000, you yoho?" Not amused in the least, he reprimands him stating: "Logging in to my court with that as your screenname. What kind of idiot logs into court like that." Saxton is visibly confused and distressed and says it wasn't him who had done so. He says, "I don’t believe I typed anything like that in." But the judge wasn't having it. Middleton then kicked him out of the active Zoom feed. "I'll put you in the waiting room and you sit in limbo for a while and think about what you call yourself online," he says. Vice reports that when Saxton returned, the name "Nathaniel Saxaon," popped up onscreen. It appears he seemingly misspelled his own name. He explained the situation to the judge.  He said, "Your honor, if I may explain. I think it was whenever I set up my Zoom account or whatever. 'Butt, um, F'er, is my iPhone pairing name for my Bluetooth speaker sir. It’s an inside joke. I’m embarrassed. I’m sorry."

According to Law & Crime, Saxton was in court on a charge of possession of drug paraphernalia. The judge said the man's crime involved a punishment of 90 days in jail and a $500 fine. He had initially pleaded not guilty to the charge but changed his mind about his plea when Middleton told him the normal fine for the offense was $200. He admitted to having the syringe and other paraphernalia and asked to pay a fine of $200. Ending the session, Judge Middleton asked him if his sister was there to which he replied, "No, unfortunately, she is not." The judge then tells him to inform her that "she almost got you put in jail for contempt of court." Saxton apologized once again, and Middleton ended the proceedings with an "Okay."

This sort of thing keeps happening in the same judge's court and it's become hilarious to me.

Netizens however had a good laugh over this unfortunate anal-themed name. Eric Havemann wrote on Facebook: Love how his screen name magically changed to his real name while his a** was getting handed to him. Henry Zhang commented: "Buttf*cker 3000" for your online alias? What an awesome move! I bet that kid is a complete riot in his 8th grade classroom. Never a dull moment! What? The guy's a fully-grown adult with the mind of a 14-year-old?

Middleton has become a minor celebrity online. He broadcasts his court proceedings to Zoom where people's worst moments are picked up and analyzed by eager fans. A more serious case took place when the judge discovered during another Zoom hearing that the accused and the victim were attending the call from the same house. This was brought to the court's notice by the prosecutor who thought something was amiss during the hearing according to another Law & Crime report.

The police were promptly called to the house and the case was adjourned. In another case, a man whose driving license was canceled was in the Zoom call with Judge Middleton while seated in the driver's seat of a car.