The former first lady elaborated on her White House style strategy in her best-selling memoir 'Becoming'. She credited her stylist Meredith Koop for her impeccable style during every event. 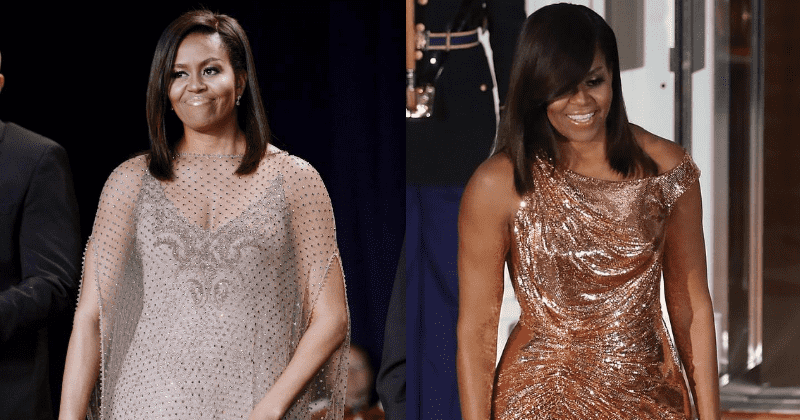 There were a number of noteworthy things about Barack and Michelle Obama's time in the White House as the President and First Lady of the United States. From their incredibly sweet relationship to the way the pair had a certain swag about them, fans of the Obama presidency adored the former first couple. Among the many things they were praised for was Michelle's impeccable wardrobe which fashionistas around the world practically drooled over. In her bestselling memoir Becoming, the mother-of-two gave readers an extensive look at what went into making her White House style one of the best the country has ever seen.

The 55-year-old shared an excerpt from her book with Elle in which she spoke about her style strategy as the first lady of the country. Michelle reflected on how right from the time of her husband's campaign everything from her pearls, belts, off-the-rack dresses from J. Crew, and "apparently brave choice of white for an inaugural gown" seemed to "trigger a slew of opinions and instant feedback." She recognized how people appeared to focus more on what she wore than what she had to say.

Mentioning one such incident, Michelle wrote: In London, I'd stepped offstage after having been moved to tears while speaking to the girls at the Elizabeth Garrett Anderson School, only to learn that the first question directed to one of my staffers by a reporter had been "Who made her dress?" She revealed that although this behavior did get her down, she tried to "reframe it as an opportunity to learn, to use what power I could find inside a situation I'd never have chosen for myself." The philanthropist hoped people would also take notice of what she had to say about important subjects of the likes of children's health when they flipped through a magazine to admire her outfit.

Speaking of her White House style strategy, the best-selling author wrote, I paid for all my own clothes and accessories—with the exception of some items like the couture-level gowns I wore to formal events, which were lent to me by the designers and would later be donated to the National Archives, thus adhering to White House ethics guidelines. When it came to my choices, I tried to be somewhat unpredictable, to prevent anyone from ascribing any sort of message to what I wore. It was a thin line to walk. I was supposed to stand out without overshadowing others, to blend in but not fade away.

She wrote: As a black woman, too, I knew I’d be criticized if I was perceived as being showy and high-end, and I’d also be criticized if I was too casual. So I mixed it up.I'd match a Michael Kors skirt with a T-shirt from Gap. I wore something from Target one day and Diane von Furstenberg the next. I wanted to draw attention to and celebrate American designers, especially those who were less established, even if it sometimes frustrated the old guard, including Oscar de la Renta, who was reportedly displeased that I wasn’t wearing his creations. For me, my choices were simply a way to use my curious relationship with the public gaze to boost a diverse set of up-and-comers, she wrote.

She chalked down her impeccable style to having her trusty stylist Meredith Koop on-board her team. Michelle credited Koop many of her iconic fashion moments as a first lady. She revealed how she came across Koop, a young sales associate at the time, at a boutique in Chicago during Obama's campaign and later persuaded her to move to Washington and work for her as a personal aide and stylist when her husband was elected President.

Together, Michelle and Koop were always careful about their wardrobe picks. In my dressing room, I'd put on a new dress and then squat, lunge, and pinwheel my arms, just to be sure I could move. Anything too restrictive, I put back on the rack. When I traveled, I brought backup outfits, anticipating shifts in weather and schedule, not to mention nightmare scenarios involving spilled wine or broken zippers. I learned, too, that it was important to always, no matter what, pack a dress suitable for a funeral, because Barack sometimes got called with little notice to be there as soldiers, senators, and world leaders were laid to rest, Michelle wrote.

In addition to Koop, Michelle also credited her hairdresser, Johnny Wright and makeup artist, Carl Ray for always helping her look impeccable. She claimed "the trifecta" gave her the confidence to step out into the public eye without the fear of being criticized for her appearance. Michelle also reflected on a certain truth she became aware of during her time as the first lady. Today, virtually every woman in public life—politicians, celebrities, you name it—has some version of Meredith, Johnny, and Carl. It's all but a requirement, a built-in fee for our societal double standard, she revealed.