Melania Slapped Away Trump's Hand In Public To Blackmail Him Into Signing Modified Prenup: Book 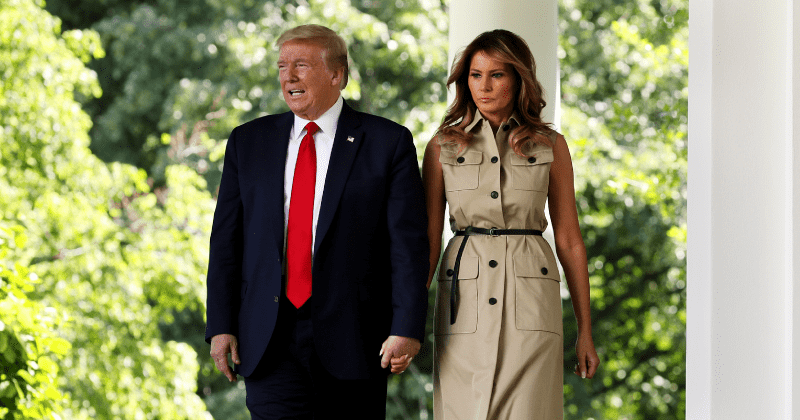 A viral video from 2017 showed Melania Trump slapping away Donald Trump's hand as the President reached out to hold her hand during an official visit to Israel. Many speculated that the couple was fighting but a new book on the first lady claims that Melania was putting on a show to blackmail the President into signing a modified prenup, according to Haaretz. Melania Trump had slapped away Trump's hand in the presence of President Benjamin and Sara Netanyahu. The book penned by Pulitzer Prize-winning journalist Mary Jordan — Art Of Her Deal — reveals the mind games started a month before the 2016 elections when an old Access Hollywood tape surfaced and showed President Donald Trump making derogatory comments about women. Trump had made the comments when he was married to Melania and she was pregnant with Barron Trump.

Melania Trump publicly backed Trump claiming it was nothing but boys locker room talk but the book by Mary Jordan claims she used the situation to demand a modified prenup keeping in mind a better future for Barron Trump. She also refused to move to the White House after Trump's inauguration. While Melania traveled with Trump and was present at his inauguration, she was always cold to Trump in public, and her slapping away Trump's hand Israel was just one of the incidents. Melania said she was staying to help Barron complete his schooling in New York and moved into the White House only six months after. She got her modified prenup, exhibiting she was just as good a negotiator as Trump claimed he was.

After a while, reportedly after getting what she wanted, Melania returned to her full-time duties. Details of the amended prenuptial agreement were never made public. Jordan also agreed that it was a form of blackmail on the first lady's part. "And maybe like a smart move," said Jordan. "His two previous wives fought with him. People said he was stingy. Now people give Melania credit for being good with her art of the deal. She said it was for Barron. She is with him for 22 years, more than any [other] woman."

Jordan also notes that Melania is not the trophy wife that many assume her to be. "The normal talk was that she wanted to marry a rich guy and that she was frightened when [Donald Trump] entered the campaign in 2015 and disrupted her comfortable world," she said. "But there is plenty of evidence to point out that from the first moment, Melania encouraged and supported him and his political ambitions." Jordan also claimed that Melania was determined to play her part in re-electing her husband. "Before the Coronavirus pandemic, she prepared herself to be more active in the campaign. The impeachment process was a trigger for her. It strengthened her bunker mentality. She wants to win no less than her husband."

The author claimed that irrespective of the image the media has of the couple, the pair share a real connection. "They’ve been together 22 years. And, by all accounts, Donald Trump is not the easiest person to be with for 22 years," said Jordan. "I’ve interviewed many people who’ve been to dinner with them, seen them up close, worked for them, and there is a real connection there. But it has changed over time and it goes up and down."

Jordan revealed in an interview with CNN that Melania's reserved personality was a cultivated image. "She does it on purpose. Her brand is to be mysterious," said Jordan. "Just as Trump’s brand is to never stop talking. There’s no such thing as too much publicity. He made his name by putting Trump on everything — every building, every magazine. Well, her brand really is (to be) the most recognized, unknown, person perhaps in the world."