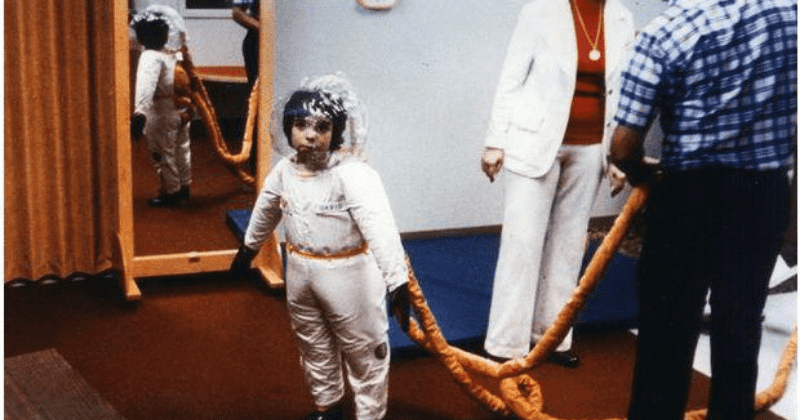 Up until the pandemic arrived, the concept of living in a bubble was limited to a person existing inside an imaginary scenario disconnected from reality. But, now we've seen the emergence of bubble travel or even bubble stay where people travel and stay within a small circle to limit contact to the outside world, and in essence the virus. However, in this boy's case, living inside a bubble, quite literally, was his life. David Vetter was a boy like any other in some ways; he ate, played, and learned as any other kid would. But there was one specific aspect to his existence that made him one-of-a-kind—his lived within plastic, bubble enclosures to protect himself from germs.

According to The Washington Post, Vetter suffered from a condition called Severe Combined Immunodeficiency (SCID), a terrible condition wherein contact with seemingly the most harmless of germs could result in his death. His unique life became the subject of massive media attention and soon he began to be known ubiquitously as "the boy in the bubble". As per the Post, the condition affects one in 58,000 infants and those affected by the illness tend to live a hard life and pass. It is caused by a genetic mutation that causes patients to produce way less immune cells that protect the body from infection. In normal immune systems, T and B cells — known as lymphocytes — attack foreign organisms and prevent them from entering the body. People with SCID, however, lack these critical immune defenses, and even a common cold can be deadly.

Vetter, a Texas resident, was born on September 21, 1971, and lived in the outside world for all of 20 seconds before being put inside a bubble. Although he was not supposed to bide his time in isolation forever, the lack of options or treatment meant that he would have to live in a sterile environment till a breakthrough would arrive. Raising a child in plastic isolation was detrimental to his development and ethically weak, the alternative, i.e., exposing him to the world would mean death. And, as doctors thought the cure was around the corner, they began to use Vetter as a research subject. His solitary existence was certainly a challenge for Vetter but he surpassed expectation at every turn. He was bright and sociable, and even though he had a visual problem due to being raised in enclosed places, and at times exhibiting signs of depression.

As the medical field progressed during his confinement, doctors planned for an experimental bone marrow transplant from his sister, which sadly became his death sentence as an undetected Epstein-Barr virus in her donor marrow triggered lymphoma and he died in 1984 at the age of 12. While his passing was a heartbreak for the medical community, the situation allowed scientists to confirm a long-held hypothesis—Epstein-Barr can cause cancer—and also provided insights into SCID.

Vetter's death has led to better bone marrow screening which in turn has increased the chances of SCID patients with transplants. Per data available to the Immune Deficiency Foundation, as many as 91% of babies who are diagnosed early and given transplant in the first three-and-a-half-months of their lives survive the condition. As Vetter's life and death were an enigma to the scientific community and the world at large, his medical records and personal papers are said to be held at the Smithsonian Institution. Of the many pieces in the museum that belonged to Vetter, the most notable ones are his Star Wars figure, which reminded the world of a child who was thrust in the midst of a then one-of-a-kind medical drama he was in no control of.

Mom was one hell of a seamstress. Some of you may have heard the story of David the Bubble Boy (David Vetter). NASA agreed to provide 2 "spacesuits" for him so that he could leave his bubble for the 1st time. Mom made both of those spacesuits. pic.twitter.com/pWjHFSfVl4