'Super Flower Moon', The Last Supermoon Of 2020, Is Happening This Week

The Moon will appear full for three days from Tuesday evening through Friday morning, according to NASA. 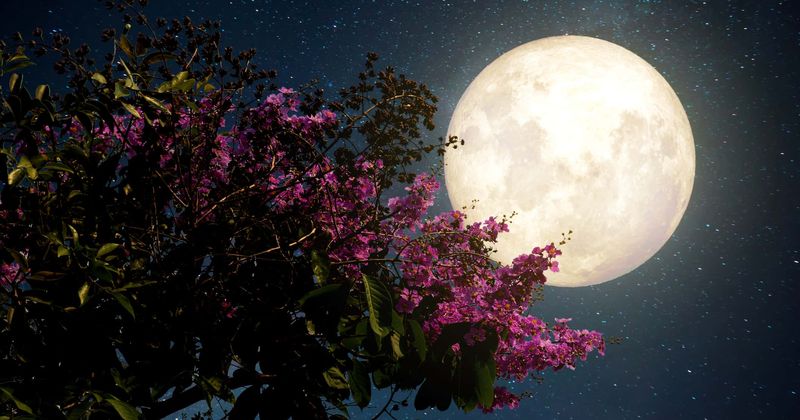 If you happened to miss one of the three stunning supermoons of 2020 so far, you will get one last chance to see another one this year. The May 7th Full Moon is going to be the 'Super Flower Moon' as it zooms into view right after sunset. There are few things to look forward to every month that comes close to the luminous glory of a full moon combined with a supermoon (when the moon is close to the Earth and appears bigger than usual). Truly now, this experience promises to be an unforgettable one and it may be just what we need to cheer us up amidst the ongoing pandemic.

Before giving you all the information on the upcoming spectacle, let's get into the basics of a supermoon. It's a fancy word no doubt but surprisingly enough, a proper definition for the phenomena isn't that easy to jot down. “It's kind of a thorn in the side of a lot of astronomers in the sense that the definition of a 'supermoon' was not created by an astronomer, but by an astrologer,” says  Dr. Jackie Faherty, Senior Scientist and Senior Education Manager jointly in the Department of Astrophysics and the Department of Education at the American Museum of Natural History in New York. “The very loose definition — and you’ll see this debated online — is that the moon is in an elliptical orbit around the Earth,” she says. “Its orbit is not a perfect circle, so sometimes it's a little bit closer and sometimes it's a little bit further away.”

The astrological definition of a supermoon is a full moon that’s at 90 percent of its closest distance to the Earth in that given orbit. “An astronomer would call a supermoon a 'perigee syzygy' moon — a full moon at its closest possible distance to Earth — but people love the word 'super,' so we go with it!” says Faherty. “I just like the idea of anything that gets people to go outside and look up at the full moon.”

Now, getting to the actual event at hand, we know that the upcoming supermoon will occur at precisely 10:45 Universal Time on Thursday, the 7th of May. That would translate to 6:45 a.m. ET and 3:45 a.m. PT. This is the time when it would be visible at 100 percent illumination, but luckily it's not the only time that we'll get to see the supermoon shine in all its magnificent awe. According to Forbes, the two most optimal times to look at the Super Flower Moon (to see it at its very best ie) would be during moonrise and moonset.

“When the moon is very low on your horizon, you get two beautiful effects that are really what people are looking for,” says Faherty. “The first is gorgeous colors — you can see the moon looking pinkish or even a little bit orangish and yellowish when it's close to the horizon.” That applies to all full moons, but Faherty’s second bit of advice applies only to supermoons. “The second is an optical illusion. When the moon is particularly close to the horizon, our brains translate that into thinking the moon looks much bigger than it actually is,” says Faherty. “All you have to do is locate where the sun is setting and turn around and look the other way to catch the moonrise — it’s always just absolutely stunning.”

Skywatchers have an exciting month of cosmic phenomena in May.
May 5: Halley's Comet Eta Aquarids meteor shower.
May 7: The Super Flower Moon.
MAY 13: Comet SWAN will be closest to the Earth.
May 23: Comet Atlas will be the closest to earth.#comets ☄ pic.twitter.com/T6btifkcXr

The upcoming 'Flower' moon will sadly mark the end of 2020's "supermoon season" but that doesn't mean we won't get to see it ever again. Fast forward to April 27, 2021, where we get to see the next 'Super Pink' Moon. Following that is a rather special Super Flower Blood Moon Eclipse on May 26, 2021, a Super Full Moon combined by a total lunar eclipse, so that's a triple delight for astro-lovers. Observers in western North America, Australia, and China will see a rare blood moon for a scintillating 15 minutes.