Massive Alligator Spotted Strolling Around In A Florida Golf Course

"That's not a gator, that's a dinosaur. Holy smokes!" the internet was baffled by the sheer size of the gator that was spotted on the grounds of the Valencia Golf and Country Club. 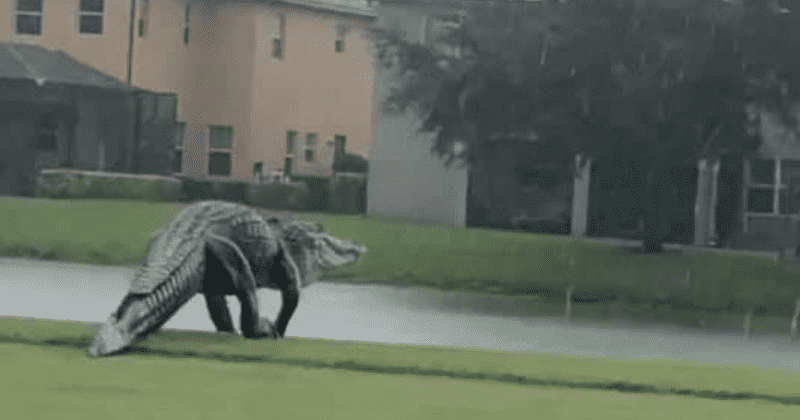 Tropical Storm Eta has caused a lot of damage over the last few weeks in regions of Florida and naturally, people have decided to stay indoors rather than bearing the wrath of the nasty gale-force winds. However, it looks as though this humongous gator didn't exactly get the memo after it was seen casually strolling around the golf course greens in Naples on Wednesday. According to NBC News, the massive gator was spotted creeping around the grounds at the Valencia Golf and Country Club. A golfer at the club by the name of Tyler Stolting recorded the entire scene on his phone.

The alligator was so huge that people began to question if it actually was real. Stolting, to general dismay, confirmed that it indeed was. “Yep, it’s real,” he told Tampa Bay Times, before adding that he found the gator at the 17th tee when he was driving around the golf course. Large alligators are usually a common sight in Florida, so much so that the University of Florida's mascots are two green gators. However, the clip went viral because the gator looked like it came straight out of a movie. Stolting himself is used to seeing gators around the course but none of them were as big as this one. “Once I got closer it definitely was a shock,” he said.

Rather than call the police or the Florida Fish and Wildlife Conservation Commission for help, the golfer just let the alligator trudge along the greens and into the water. Alligators are usually not known to harm people when left for themselves and instead opt to hunt for animals that they can easily overpower for their food. "Most alligators are naturally afraid of humans but may lose that fear when people feed them. Feeding alligators teaches them to associate people with food. For that reason, it is illegal to feed wild alligators," the commission noted.  They went on: "Alligators seldom bite people for reasons other than food. Female alligators may protect their nests by hissing and opening their mouths to frighten intruders but rarely bite people. Alligator bites are most likely to occur in or around water. Bites on humans have occurred in a variety of water bodies, many of which are small and not regularly used by alligators. Although alligators can move quickly on land, they are not well adapted for capturing prey
out of the water. However, they can lunge at prey within a few feet of the shoreline".The storm, meanwhile, has been raging for a while and even intensified to a Category 1 Hurricane before hitting the state. It became the sixth ever November hurricane to be seen in the Gulf of Mexico.

Good lord. Looks like it's gonna find a Chevy Spark and drag it home for dinner.

People on Twitter had some incredulous reactions to watching the alligator walking away into the water. Leigh29uf said she has seen other gators but none as big as this. "Wow. I’ve seen some large ones on my golf course in Miami, but this one is humongous!!!!!!" ImpalerTrump seemed to have encountered the beast before and even seemed to have given it a name. The user wrote: "That’s Bruce! He got out of our back yard yesterday before we could feed him. He’s dangerous when he’s hungry!" JimJamesJimothy pointed out that this was truly a 2020 thing to happen. They wrote: "Jesus 2020. At this point you're just chasing the night. Go home." MandoGirl added: "That's not a gator, that's a dinosaur..Holy smokes!"