'A League of Their Own' Mary Pratt, Last Surviving Member Of Rockford Peaches, Dies At 101

The 101-year-old passed away in a private clinic in Massachusetts last Wednesday. 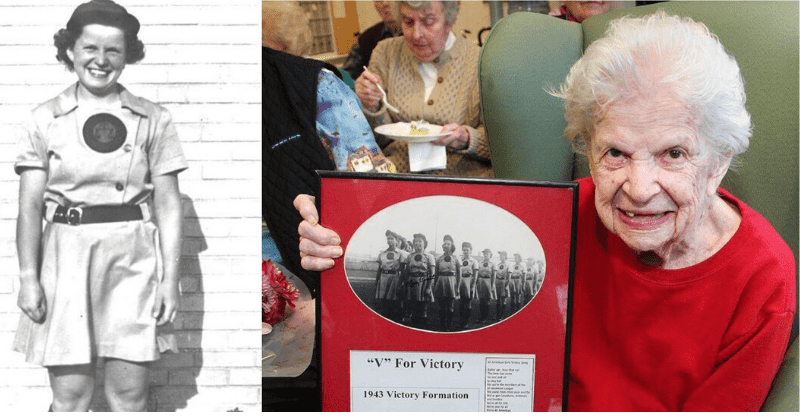 The world of baseball has just lost a legend. Mary Pratt, of Quincy, said to be the last surviving member of the All-American Girls Professional Baseball League (AAGPBL) from the 1940s has died at the age of 101. According to The Patriot Ledger, the news was confirmed by her nephew, Walter Pratt on Wednesday, May 6. Speaking to the publication, Walter said: “Mary passed away peacefully at the John Scott nursing home in Braintree.”  Pratt, who played from 1943-47, died of natural causes and was buried the following day. The AAGPBL took to Twitter to confirm the news and also to highlight the high points of her career.

We are terribly sad to report that former Rockford Peaches and Kenosha Comets pitcher, Mary Pratt passed away on May 6th. She was 101 years old. Mary was the last known original Peaches player that played on the 1943 team. Her stories, her energy will be missed for a long time. pic.twitter.com/dKFlbbBzf8

The veteran's death was met with heartbreak from across the spectrum as people came together to remember the legend for her continued contribution to the world of women sports, her continued fight for women's rights, and her career in physical education which inspired thousands of women to explore the world of sports in the '40s. “It is a sad day in baseball this week,” David Allen Lambert of Stoughton, chief genealogist of the New England Historic Genealogical Society in Boston, said. “I met Mary over 20 years ago at the Stoughton Historical Society when she gave a talk. She was such a wonderful lady to chat with. She brought the days of the All-American Girls Professional Baseball League alive to those who were not alive to see these ladies play ball.” He continued: "Rest In Peace Mary - it was an honor to shake your hand and meet you over 20 years ago. You have now joined the true Field of Dreams go find your team mates they have been waiting for you."

My Grandmother was on this team for a short time. They did such a great thing. May she rest in peace. ⚾️

Pratt was such a pioneer, she was the main inspiration behind the making of the 1992 blockbuster sports-comedy movie A League Of Their Own which went on to immortalize the league. The movie, directed by Penny Marshall, had a strong cast including Tom Hanks, Geena Davis, Madonna, Lori Petty, and Rosie O'Donnell, and went on to make $132.4 million on an initial budget of $40 million. The movie was of such significance that the U.S. Library of Congress went on to preserve it in the National Film Registry in 2012 terming it as being "culturally, historically, or aesthetically significant."

101 years is quite a life...so glad she gave a portion of her life to baseball fans. Thoughts go out to her family and friends. #Respect

An incredible woman who inspired so many. Our heart go out to her family and loved one. "Mary Pratt, Rockford Peaches pitcher of ‘A League of Their Own’ fame, dies at 101" https://t.co/d3ANV1Now9 via @YahooSports

Besides playing baseball, Pratt was also a multi-sport athlete and often took part in basketball, volleyball softball, field hockey, lacrosse, tennis, sailing, and archery during her spell at Boston University's Sargent College. Rose Somensini, 89, of Lancaster, who attended the college with Pratt, said: "Mary was a wonderful and a very unique person. We won’t see her kind again." Somensini was also one of several alumnae at Pratt’s 100th birthday party in 2018 at Grove Manor Estates in Braintree. "It was just wonderful knowing her. And as for physical education and coaching girls and women’s sports, she was a wonderful promoter of girls and women’s sports.” Twitterverse also had some great experiences to share about the sports personality. A user named Drew Taylor, wrote: "I had the distinguished honor of working with her teammate Jacqueline Baumgart many years ago. She had fond memories of all the Rockford Peaches players and today is truly a sad day, as part of our collective heritage has passed. Condolences to her family, and RIP."

RIP to Mary Pratt, believed to be the last surviving member of the original Rockford Peaches. She died May 6 at age 101. In 5 years in the @AAGPBL she threw a no-hitter & was a 20-game winner. She spent 48 years as a teacher in Massachusetts, too. https://t.co/LsKJvEvho2