The Mount Washington observatory has had a cat as a mascot since 1932 and the tradition will continue on, even after Marty's death. 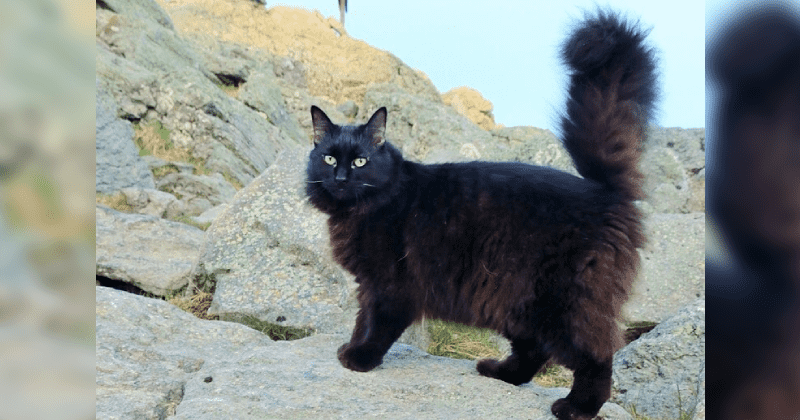 The staff considered Marty a "special companion" to them. "As a past observer who lived on the summit for four years I can tell you Marty was a special companion, entertainer and so incredibly loved by observers and state park staff and will be sadly missed," said Scholand. The Mount Washington Observatory is at the highest peak in the northeast US, the summit standing at 6,288 feet. Mount Washington is extremely cold and is known as "home of the world's worst weather." The staff at the observatory maintain a weather station on the summit and perform weather and climate research. The nonprofit organization collects weather data at the summit every hour of every day. Due to the extreme weather conditions, the Mount Washington Observatory is operated by two alternating crews who live on the summit for a week at a time. The staff's duties include de-icing the instruments to keep them operational. As the staff at the observatory weathered harsh conditions, Marty served as a steadfast companion.

The staff at the observatory experience hurricane-force winds winters every three days and are often subject to 100 mile-per-hour wind gusts at least once a week. “We can have visibility as low as you really can’t see anything” as well as “supercooled water droplets that freeze on contact,” said Scholand.

Marty was scheduled to retire in 2021 but unfortunately succumbed to the illness. The staff at the observatory bid goodbye to their mascot in an emotional post on Instagram. "The sun has set on Marty's time here at the observatory. It is with great sadness that we announce the passing of Marty the Cat. For many years he has provided the summit staff of the Mount Washington Observatory and State Park with companionship and love. Due to an unforeseen illness, he passed away peacefully. To Marty the Cat, thank you for all your silliness, snuggles, and companionship not only to the summit staff, but to everyone who ever met you." The post was met with emotional tributes, and crying and heartbreak emojis.

“I want to say his eyes were green — I’m pretty sure they were green,” said Scholand, reported The New York Times. “Nice long fluffy tail. There were days when he would want to rub up against your leg and sit in your lap when you were doing your work,” she said. Scholand added that Marty had a majestic air about him and would greet people “with his tail up in the air, just flaunting the fact that he was the highest cat in New England.” According to her, Marty always showered affection on his own terms.“He might love you one week and the next week, he wouldn’t come near you. Typical cat,” she said.

Having had a cat as a mascot since 1932, the observatory plans to find a successor to Marty. "The summit feline tradition will continue," confirmed the Mount Washington Observatory in a statement.