The room, which is around the size of a store dressing room, has been described as a "solitary-confinement cell used to psychologically torture women." 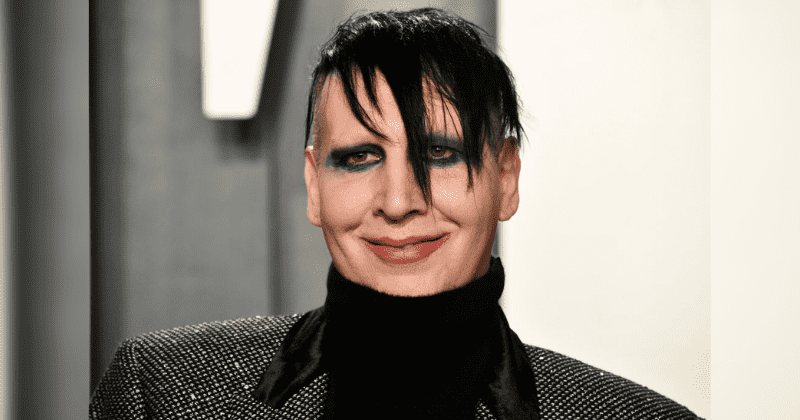 What started as a vocal booth quickly became a torture chamber where Marilyn Manson allegedly banished his girlfriends. A recent in-depth report by Rolling Stones revealed that the singer's California apartment features a small, soundproof glass enclosure where many women have accused Manson of locking them in. The room, which is around the size of a store dressing room, has been described as a "solitary-confinement cell used to psychologically torture women," by several people who dated and worked with the artist. Manson, whose real name is Brian Warner, would frequently lock his former girlfriends in the soundproof room for hours on end as punishment for the tiniest perceived transgressions. Apparently, he called the enclosure the "Bad Girls’ Room."

Ashley Walters, his former assistant who is now suing the songwriter for sexual assault among other charges, revealed how Manson enjoyed telling others about his chamber. "He always had a joking, bragging tone," she recalled. The Beautiful People singer himself spoke about the room during a 2012 media interview saying, "If anyone’s bad, I can lock them in it, and it’s soundproof." While speaking with V Magazine in 2011 he even showed a journalist the room and described it as his "his perfect lair: a recording studio, a bedroom with a ‘bad girls room’ (some former shower or steam room that’s now a lockable, soundproof glass enclosure), and an enormous and black-out space that serves as a movie theatre, bar, art studio, and den for the congregation."

You've probably heard some of the allegations against Marilyn Manson. A nine-month @RollingStone investigation reveals the truth is much, much worse. https://t.co/euFHWYUVNy

However, another former assistant Ryan Brown has denied having seen any women enclosed in the "Bad Girls’ Room" in the 8 years she worked for him. But she did note, "It was common knowledge that’s what everybody had called it." Ashley Morgan Smithline, a former girlfriend, told Rolling Stone that the shock rocker would repeatedly force her to remain in the space for hours at a time. "At first, he made it sound cool," said Smithline. "Then, he made it sound very punitive. Even if I was screaming, no one would hear me... First, you fight, and he enjoys the struggle. I learned to not fight it, because that was giving him what he wanted. I just went somewhere else in my head." Smithline is suing Manson for sexual assault and unlawful imprisonment.

Game of Thrones actress Esmé Bianco alleged that she was frequently abused by him verbally when they dated. Not only did Manson deprive her of food and sleep frequently but also cut, bit, electrocuted, and whipped her without her consent, allegedly. She claimed that he even raped her during the two years of dating. Bianco even recalled a horrifying incident when Warner chased her around the apartment with an axe and smashed holes in the walls saying that she was "crowding him." Bianco, who has sued him for sexual assault and sex trafficking said, "That was a final-straw moment for me." His actions made her fear for her life to such an extent that she felt leaving "was my best attempt to survive."

Even Evan Rachel Wood said that the artist "horrifically" abused her while they dated from 2007 to 2010. When singer Phoebe Bridgers visited his home as a teenager, she remembered Manson referring to one of the rooms as the "rape room," which at the time she felt was a "horrible frat boy sense of humor." Ever since the allegations came to light, the 52-year-old has denied it. He would also share videos of himself receiving oral sex with new friends according to PEOPLE. "Brian popped in a compilation tape of every girl he had ever taken into his closet for a blowjob," recalled Russell Vaughn, who once hung out with him. "He was proud of it." Manson would "joke about rape all the time," a source revealed adding, "He loved the idea of rape — talking about rape, seeing it in the movies."

Back in February, he shared a post on Instagram which read, "These recent claims about me are horrible distortions of reality...My intimate relationships have always been entirely consensual with like-minded partners." Per Independent, he also maintained that the women accusing him were "desperately trying to conflate the imagery and artistry of [his] 'shock rock' stage persona, 'Marilyn Manson,' with fabricated accounts of abuse." But accuser claim that he hid his abuses in "plain sight behind the Marilyn Manson character he created and the music industry that supported, and profited from, his living-demon shtick," according to Rolling Stone.

The label knew, management knew, the band knew. Distancing themselves now, pretending to be shocked and horrified is fucking pathetic.