Practically every woman's living nightmare, this convention will take on topics such as feminism, the "collapse of intentional motherhood," and #beautypositivity. 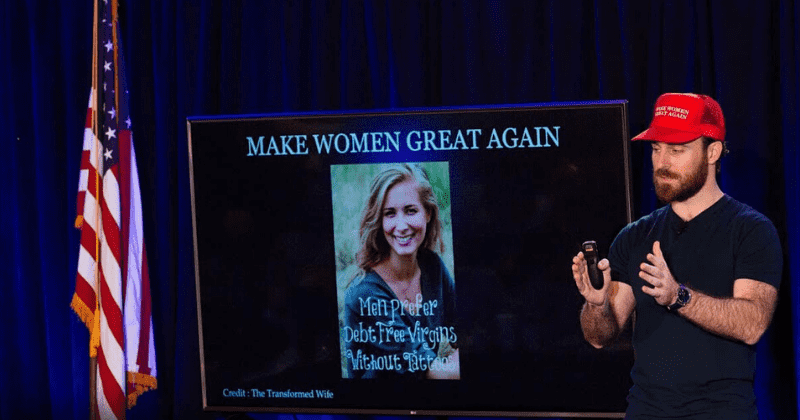 "The world's ultimate event for women, by men." That's how The 22 Convention proudly describes its 3-day "Make Women Great Again" event set to take place later this year. Yep, an actual convention with an all-male panel catering exclusively to "natural-born women" with the promise of dramatically improving their "life and femininity." Quite a time to be alive, isn't it? Practically every woman's living nightmare, this convention will be the first (and hopefully the last) of its kind when it makes its debut in Orlando, Florida, in May this year and takes on feminism, the "collapse of intentional motherhood," and #beautypositivity.

"Women today are being taught to act more like men. Where has that led us? Skyrocketing rates of divorce, depression, dysfunction, and America at the #1 spot in the world for single motherhood. No longer will you have to give in to toxic bullying feminist dogma and go against your ancient, biological nature as a woman," the event organizers state. For the incredulous price of $1999, women are offered the chance to learn from 'iconic speakers gathered from the worldwide manosphere community' on how to become 'your very own ideal woman.' Excuse me while I go throw up.

According to the event's unapologetically misogynistic organizers, the 22 Convention will take a detailed look at a few critical issues men and women face today. The anti-feminine, anti-motherhood propaganda that is feminism, the "body positivity" lie, and the supposedly decades-long attack on positive masculinity and femininity which has supposedly taken a toll on love and dating. Yeah sure, forget climate change, the environmental crisis, power-hungry world leaders, and everything else actually wrong in the world today, what the world clearly needs today is an almost all-white panel of entitled men explaining why women need to embrace their femininity and heed their one-true calling of becoming perfect wives and mothers.

"Hiding under a mask of fake progress, feminism today has become a radical assault on all forms of positive femininity - you know, the one hardcoded into your DNA. Through an onslaught of anti-feminine propaganda spanning generations, women today have been pushed to act like men and DENY their own feminine nature. This has left millions of women feeling unhappy, confused, frustrated, and hopeless," the website states. They also blame "poverty, crime, mental health issues, and an overall decline in well being" on "feminist anti-motherhood propaganda" which has supposedly been lying to generations of women that they "can have it all," thereby "tricking them into de-prioritizing motherhood until ~90% of their eggs are dead by 30."

Oh and those who actually spend TWO THOUSAND DOLLARS to attend this hopefully once-in-a-lifetime circus will also be signing up for 3-days of paid body-shaming. Because "being sick and obese is not beautiful," and "men admire healthy, fit women. They are after all sizing you up for reproduction, and your decisions will be passed on to your children through the choices you make via epigenetics." Yeah, because the sole purpose of a woman's existence is to find a mate who finds her attractive enough to impregnate her. "At The 22 Convention, you’ll learn how women have been lied to about "body positivity" and how you can embrace #beautypositivity right away!" Seriously, what were these men smoking when they came up with this?

"For the past several hundred thousand years of human life on this planet, masculine men have preferred feminine women in all areas of life; from the kitchen to the bedroom, dating to relationships, marriage, family, and beyond. High-quality masculine men want high-quality feminine women to mother their children and set great examples for their daughters," the organizers add while promising to "raise your femininity by 500%." The 22 Convention will allegedly also help you "get pregnant and have unlimited babies" in addition to learning the secrets to becoming the ultimate 'wife material' in today’s hyper-competitive, dystopian, sexual marketplace of Photoshop, camera angles, and cheap sugar baby sexuality.

Early bird tickets for the 22 Convention are currently available for $999 and ticket buyers can also bring a friend with them for free. A neat trick to try and fill up seats, isn't it? In case you can't convince a friend to tag along and experience the worst 3 days of their life, you can "use your +1 for your man! Have a husband or boyfriend you want to attend with you? Send him to The 21 Convention! Same weekend, same venue, separate event for men and fathers." If you've managed to resist the urge to throw up violently untill now, try watching this trailer of what's in store at this godforsaken convention: