trending celebrity people lifestyle news animals
Man With Down Syndrome Retires From McDonald's After 32 Years: 'We’re Going To Miss Him'

Man With Down Syndrome Retires From McDonald's After 32 Years: 'We’re Going To Miss Him'

Russell O'Grady broke the conventional mold and, in doing so, showed the world what disabled people are capable of. 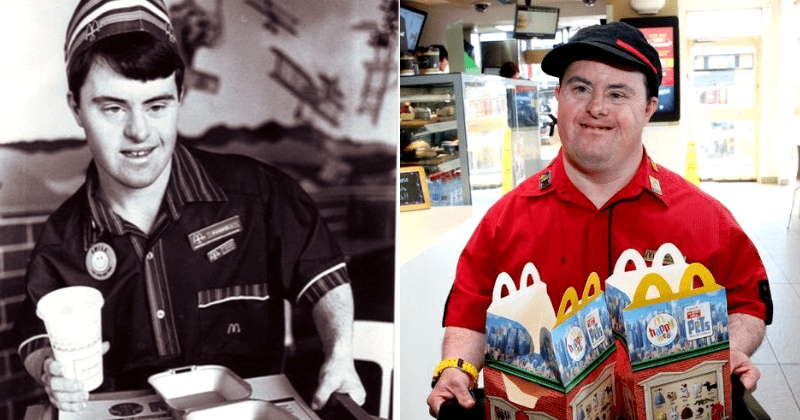 Russell O'Grady worked for 32 years at McDonald's before finally hanging up his boots back in 2018. O'Grady was born with Down syndrome—a genetic disorder that impacts the intellectual and overall development of an individual. O'Grady's life is even more of an achievement as people born with his disability have a lower life expectancy. As a result of this, parents typically closely guard these children and prefer to keep themselves close at all times—homeschooling and generally keeping them away from taking up work, reports Aleteia.Org. O'Grady, however, broke the conventional mold and, in doing so, showed the world what disabled people are capable of.

Russell O'Grady was born with Down Syndrome almost 50 years ago. We celebrate his achievements... #TMS7 pic.twitter.com/eUNqLUAGKr

He began working at Northmead McDonald's in Sydney over three-and-a-half decades ago in 1986. His employment came at a time when disabled people were rarely given the opportunity to sustain themselves and build a life of their own. What O'Grady did back was commendable because he broke the stereotype that disabled people aren't capable of holding jobs. He served as a cheerful employee from the age of 18 till he turned 50 with a smile on his face. When he first joined, O'Grady didn't have any work experience but the world-famous fast-food chain took a punt anyway, and he didn't disappoint. Instead, he impressed his peers and management with his hard work and dedication to always work. At first, he started out packing party boxes, before being assigned other tasks soon after.

Popular employee Russell O'Grady has worked for McDonalds for 30 years, showing #disability is not always an obstacle to #employment https://t.co/IgTIMosNdR #diversity pic.twitter.com/wo7pPdk7Kv

As he transitioned to a customer-service role, his personality grew in stature, and people soon arrived at the store just to meet him and talk to him. In fact, he was also described as the "best-known person in Northmead" by the locals. His kind nature and friendly demeanor also turned him into a local celebrity as he always had a smile on his face. Courtney Purcell, one of his supervisors, said: "We’ve got regular customers who come in to see Russell on Thursday and Friday, and the staff looks after him, so we’re going to miss him." His younger brother, Lindsey, too, is inspired by his brother and says he looks up to him. "He’s kind of blase about it but loves his work very much. He’s pretty cheeky sometimes. He’s my big brother and he keeps me in line."

According to Now This, O'Grady got his job through Jobsupport, a platform dedicated to helping people with intellectual disabilities find paid work. He was one of the first to have access to the program. Wynn Visser, an assistant manager, said: "Russell’s impact on people in his community is without a doubt exceptional." The platform partners with over 75 different McDonald's outlets and regularly places their graduates in these stores. Geoff, O'Grady's father, is very thankful for the opportunity his son was offered: "We have to really start with thanking McDonald’s, and their insight, and Jobsupport, and the people supporting Russell throughout the years, because without the initiative, lots of people like Russell wouldn’t have the jobs that they do today, lots of people like Russell wouldn’t have the jobs they do today, and they wouldn’t have the reward it gives them, which is a pride, a boost to their self-esteem…"

A pioneering worker who helped paved the way for other people living with intellectual disabilities retired today from his much-loved job at @McDonalds. Russell O'Grady has Down Syndrome but that didn't stop him taking up work when doing so seemed almost unthinkable. #7News pic.twitter.com/dKieRu6bLy

In 2016, all the employees of McDonald's threw a party on the occasion of Russell completing 30 years of employment. O'Grady has since retired due to health reasons. Visser, however, states that this isn't the end of the chapter for O'Grady, as he is set to keep himself busy with dog therapy and bowling.