Man Stands For 6 Hours In Flight So Wife Could Sleep — Romantic Or Just Stupid?

A photo shared on Twitter has sparked a rousing debate about the true nature of love. 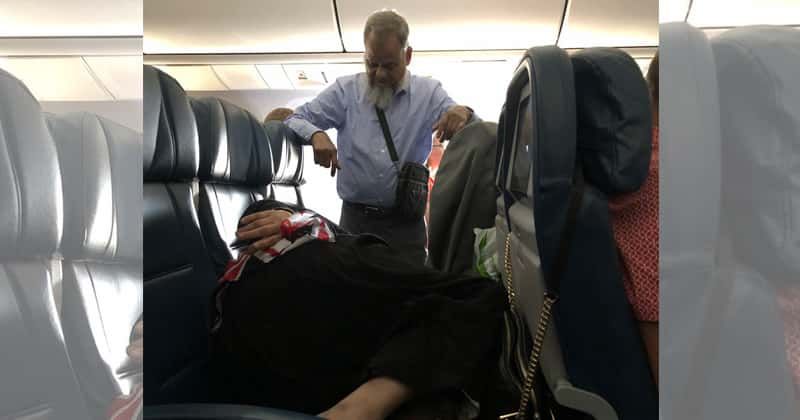 What is love, really? Is it just wanting the best for your partner, always? Is it surprising them with little unexpected gifts? Is it sacrificing your own comfort for several hours when there's a much easier solution? Whatever the answer, the question is no doubt the great divider of our society. A photo of a man making a so-called romantic gesture has received outrage and confusion online. A tweet shared by life coach Courtney Lee Johnson showed an unidentified man, who had apparently stood in the aisle of the plane for a six-hour-long flight so that his wife could sleep stretched across a row of three seats. "Now THAT is love," Johnson wrote.

This guy stood up the whole 6 hours so his wife could sleep. Now THAT is love. pic.twitter.com/Vk9clS9cCj

Is it love? Or is it just stupid, when the woman could have (as many, many Twitter users suggested) just rested her head on her husband's lap so he too could have a seat, like so many of us seasoned travelers do? With over 3,500 retweets and almost 3,000 responses, the tweet sparked a debate about love, sacrifice, and abuse. Some people thought it was romantic, with one Twitter user writing: I’ve never been THAT in love...can’t wait to be so in love that I even consider that an option lol.

Same. I’ve never been THAT in love...can’t wait to be so in love that I even consider that an option lol

But many, many others called the wife selfish, pointing out that she could have just rested her head in her husband's lap. Some wondered how the man remained standing the whole time without objection from flight attendants. I can't let my man stand for even 10 minutes. I'd definitely be sleeping on his laps which would even be more comfortable, wrote one person. Or rest properly on the chair. Why would you let your man stand for 6 hours? Others compared the situation to that oft-referenced debate from The Titanic—yes, y'all, there WAS enough space on that door for two people and Jack didn't have to die. Whatever actually happened in the image, we'll never know. Both parties came out not looking too good from the discussion—while people referred to the husband as "soft" and "whipped", many called the wife abusive and selfish.

Why can't she sleep on his laps as he sits?
This one is charade.

The flight attendants wouldn’t even allow this 😪😪😪

We need to let go of this idea of love that involves suffering.

I can't let my man stand for even 10 minutes. I'd definitely be sleeping on his laps which would even be more comfortable. Or rest properly on the chair. Why would you let your man stand for 6 hours?

That not love. That's selfishness on the woman's part. Can't she just place her head on his shoulders and sleep. Love doesn't work like that lol

Now that is fake!!! No one is allowed to stand and block the aisle for the duration of a flight. He would have been ordered to sit or taken off the flight. Utter rubbish!!!

A few people seemed to come up with reasonable explanations for the image, though:

His expression looks like he went to the bathroom and came back to find her sleeping in his seat. He seems to be trying to figure out what to do.

Pssh. Narrative is wrong. He went to take a leak and came back to find she had made herself more comfortable. 6 hours? Hhaybo.