Man Sets Puppy On Fire And Abandons It In Plastic Crate At Park In Columbus, Ohio

The 3-month-old dog suffered burns with plastic melted on her back. She was treated at an animal hospital and was adopted by staff there. 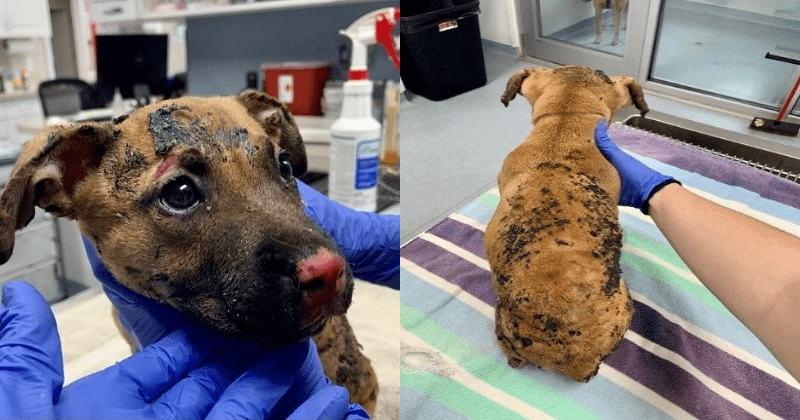 A man in Ohio set fire to a crate with a puppy and left the animal to suffer in it. Luckily, the injuries suffered by the dog were not severe. The animal abuser was also later caught by the cops who confessed to his crime. The incident took place at Columbus Park on October 11 between 11:30 a.m. and 12:30 p.m. A Facebook post by the Columbus Police stated that "a small puppy was set on fire while in her plastic cage/crate." The crate was found at the Walnut Hill Park on the East side of Columbus. "Firefighters responded to the park just afternoon and found a small area of melted plastic on fire underneath a tree in the park. As firefighters were extinguishing the fire, they observed a small yellow/ blond puppy with white feet, and a white flea collar, running in the area," the post added.

Plastic inside the crate had melted onto the skin of the pup's back, according to the firefighters, who also realized it had been trapped in the crate for a while. Pictures shared by the police also show the pup with melted plastic on her face in the area around the eyes. The pup was immediately taken to the Diley Hill Animal Medical Center where she was treated for her burn injuries. Meanwhile, the Columbus Fire and Explosives Unit Investigators got involved to locate the culprit. At the same time, the authorities also requested help from the public in trying to find the person responsible for the cruel act. Investigators also worked with the Columbus Humane Society to identify the culprit. They were also looking at identifying the puppy’s former owner.

A report by 10tv highlighted that the female puppy was three-month-old and was found under a tree with black melted plastic on its back. She was running around when the firefighters found her. "As fire investigators, this is heart-wrenching and sickening for us. We see a lot of bad things on a daily basis, but this has cut a lot of our people to the core," said Mike DeFrancisco, an investigator into the case. Ultimately on Thursday, a suspect named Ra’shae Syrtaj Jermaine Johnson was identified by the Columbus Division of Fire. He confessed to his crime. Johnson was charged with "Provisions Concerning Companion Animals," a fifth-degree felony. The good news, however, is that the pup was adopted by "staff at the animal hospital, and is doing remarkably well." the post stated. She was named after the lead character in The Legend of Korra, according to the news outlet.

Can we do that to him?

The character is known as a survivor and the owners thought it an apt name for the pup. In another post by the Columbus Police on Saturday, the department thanked the community for the help and cooperation in the case. "The Division of Fire would like to extend our gratitude and thank everyone who called with information relating to Korra's case. We were overwhelmed by the community involvement and the generosity of those who offered money for medical bills and reward money," it said. The authorities were able to catch the criminal within 24 hours of the incident only because of the huge support they received from the public, the post stated. Thereafter, they brought him in for questioning. "He eventually confessed to lighting fire to the plastic crate that Korra was locked in. He is currently in custody on felony charges," the post added.

Regarding the pup's condition, the post stated, "Korra continues to heal and is enjoying her new family. People who are calling from all over the country to donate money are being directed to donate to the Columbus Humane Society, or whatever local animal charity you prefer." Commentators of the post wished Korra well and congratulated the cops. One of them, Rebekah Devi wrote: I wish the best possible new life with your new family, Korra. It’s amazing how forgiving animals are when they have every reason not to trust again. Thank you Columbus Division of Fire for getting the suspect off the streets before hurting anyone else.