One man decided that the holidays would be the perfect time to conduct an experiment that risked his relationship with the in-laws, just for the sake of proving a point. 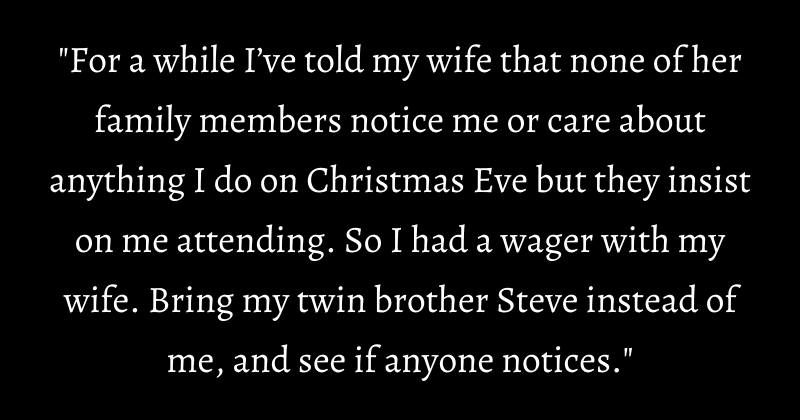 The holiday season can be particularly stressful for married couples. With two families to keep happy, it's a struggle to juggle the overwhelming number of holiday brunches, luncheons, dinners, and parties you have to attend on both sides. It's even more so when one doesn't feel entirely comfortable around their spouse's family and has to put on a smiling face just for the sake of avoiding tension. One man, however, decided that the holidays would be the perfect time to conduct an experiment that risked the precarious fiber of his relationship with the in-laws, just to prove a point.

However, the experiment wound up stirring trouble in his marriage and left him turning to Reddit's r/AmItheAsshole community to seek the internet's wisdom. Recounting the said incident, he wrote, I am 31 and have an identical twin brother. For a while, I’ve told my wife that none of her family members notice me or care about anything I do on Christmas Eve but they insist on me attending. She told me that’s not true, they genuinely like me and enjoy talking to me. But I know that the only times they’ve included me I had to basically insert myself into conversations and it feels awkward and unnatural.

Rather than suck it up and spend Christmas Eve sitting alone in a corner, the Redditor u/twinbrother88 set a wager with his wife. So I had a wager with my wife. Bring my twin brother Steve instead of me, and see if anyone notices. I purposefully did not prep Steve on anything, he went in completely clueless (he knew why we were doing it and was game. I gave him $20.) As I suspected, Steve confirmed that he wasn’t approached all night, nobody could tell he wasn’t me, and he admitted he even felt excluded and he could only imagine how I felt, he wrote.

While a smart husband would've been happy gloating about his findings to his wife with a few "I told you so"thrown around for good measure, this dramatic spouse chose to play with fire and call out his in-laws on their behavior. So this morning on Christmas I invited Steve to join (normally he’s with my mom and dad every year as he’s not married or in a relationship.) They know about him obviously but didn’t know about the switcheroo. That was when I revealed that last night 'I' was Steve and expressed disappointment that nobody noticed and said this is why I stopped trying, nobody talks to me, he revealed.

As you can imagine, his wife wasn't too happy about him embarrassing her family. My wife drew the line here, she was hoping we would keep this between the two of us as a funny prank. But how can I expect her family to see what jerks they’ve been if I don’t expose it? FWIW Steve was fine, he wrote. While Redditors had a hard time deciding who was to be blamed in this scenario, the overall opinion was that everyone involved was at fault to some degree. And if you are wondering how his in-laws reacted to his exposé, the daredevil husband revealed that they simply shook their head and told him that he was being dramatic. Eeep!