trending celebrity people lifestyle news animals
Man Proposes To Girlfriend Under Comet That Appears Only Once In Every 6,800 Years

Man Proposes To Girlfriend Under Comet That Appears Only Once In Every 6,800 Years

John Nicotera popped the question to his girlfriend of two years as Comet Neowise descended the skies, and his friend captured the beautiful moment 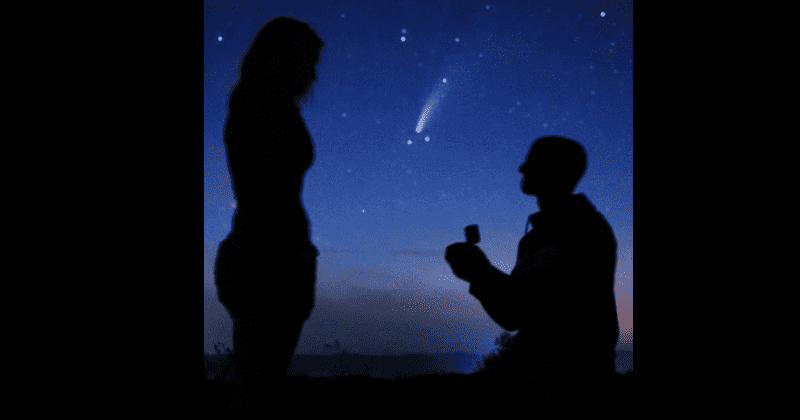 New York couple John Nicotera 33, and Erica Pendrak, 26, have been in a relationship for two years. Among the many interests, the couple shared, their love for space was the one that promised them a happily ever after. Nicotera and Pendrak drove to his family's camp in Old Forge, New York to catch a sight of Neowise, the comet that graced the skies for close over five days just last week. However, Pendrak didn't have an inkling of an idea of what was awaiting her. As the couple watched the comet descend the skies, Nicotera got down on one knee and proposed to his girlfriend, reports CNN.

How one man had a cosmic intervention as he got down on one knee. The story behind this out of this world proposal! @YohnnyNic pic.twitter.com/lzmon1ioLP

In doing so, Nicotera became one of the very few, if any, men to have proposed under a comet that is seen once in 6,800 years. The couple, both teachers, look forward to experiencing historic events together. So when Nicotera learned that Neowise was approaching the earth at its closest-ever —160 million miles from Earth—he realized the chances of a similar setting coming by was quite literally astronomical. Therefore, he thought to himself: "This could be our engagement. This is not going to happen in our lifetime or five generations' lifetimes."

That is when he realized time wasn't on his hands. So he planned the camping trip to coincide with his proposal without giving away any hints. The couple was peering into the sky as the comet soared before he dropped on one knee and asked her to marry him. Narrating the tense moment, he said: "Every single star was out ... it was too special to let it go. I just remember the amount of happiness I had going through me. All the nerves were gone at that point. I was just like, 'I'm massively in love with this girl. I'm going to do it."'

Congratulations! Photos are pure beauty with the comet in the background.

"I then dropped down on one knee and I asked Erica to marry me in front of Comet NEOWISE," Nicotera said, according to WAPT. Pendrak was shocked by the thoughtful proposal, too. She said: "I was just completely shocked. Tears and everything." Luckily, Nicotera had planned the moment well in advance and even had his friend, Tim Leach, in tow, who snapped pictures of the magical moment. "Tim froze time for us so we could live this moment forever," Nicotera said explaining Tim's long-exposure shot. "I've never seen anything so beautiful." Speaking to Insider, Pendrak said: "I love that I'm able to share genuine, serious, loving moments with John just as much as I can share silly moments."

And there it is. This probably won't be the last astrophotography we post overnight. #neowise #nightsky #wawx pic.twitter.com/O5bGAiB4sZ

Nicotera had originally wanted to propose to her at the Crater Lake a few months ago. However, as the pandemic hit, he was forced to rethink his plans. He told CNN: "I've been very bummed because I was going to do it a Crater Lake and it was going to awesome." But perhaps he was destined for better things, and it all fell into place thanks to a cosmic intervention. According to NASA, Neowise is one of a very tiny list of comets visible to the naked eye this century and it could even become known as the Great Comet of 2020. While the comet was visible to the eye, the agency said telescopes or a pair of binoculars revealed great details especially during the twilight periods of the morning or the evening.