"So, I did it. I started out consulting with two guys in Dean Guitars’ wood shop in Tampa but they got cold feet," he shared of his pursuit. 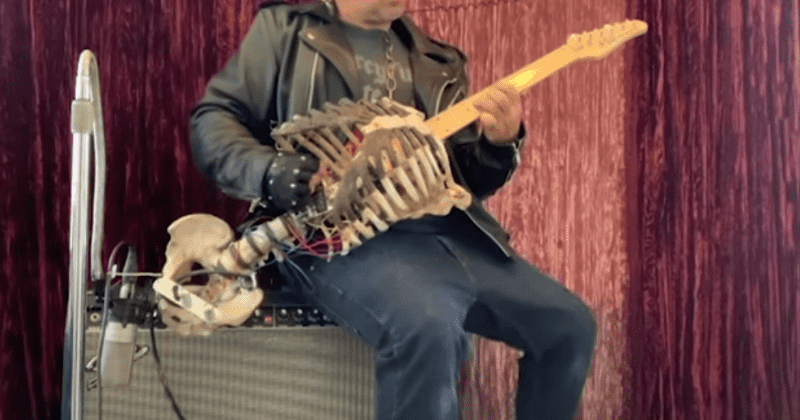 People go to incredible lengths to pay tribute to their loved ones. But, believe us when we tell you nobody can compete with the metal-ness this guy pulled off for his uncle. Prince Midnight, a metalhead, was saddened after the death of his uncle who introduced him to metal music, so to honor him, he turned his uncle's skeletal remains into a fully functional guitar. Yes, it's true the tale sounds morbid but like most stories, there's more to the story than meets the eye. According to Metal Sucks, the guitarist constructed the instrument using his uncle Filip's bones. As the story goes, the uncle died of a car accident around the turn of the millennium and his bones were donated to a college in Greece where it was perused for educational purposes for over twenty years.

“I did a lot of research and no one has ever made a guitar out of a skeleton. So, I did it.” https://t.co/vWRhV9UTY1

But, when the school no longer required the use of the skeleton, it decided to return the bones to the United States. Being Orthodox Greeks, though, Midnight and his family were averse to cremation and saw burial as the only choice. But because it would cost a fortune to arrange for one they were left looking for alternatives. That's when Midnight came up with the idea of turning a part of the skeleton into a guitar. In a project that took months, he turned the torso into the body of the guitar to which Midnight then added pickups, neck, volume knobs, and more. He then etched the moniker "Filip Skelecaster" on the headstock in his uncle's memory.

Speaking to Metal Sucks, he said: "So, I got the box of bones from Greece and didn’t know what to do at first. Bury them? Cremate them? Put them in the attic? All seemed like poor ways to memorialize someone who got me into heavy metal. So, I decided to turn Uncle Filip into a guitar." Getting the project done was a big challenge because no human on earth had attempted a project like that. So, Midnight had to conduct a lot of research on his own. "So, I did it. I started out consulting with two guys in Dean Guitars’ wood shop in Tampa but they got cold feet." While most people would give up due to the lack of options. Midnight didn't because he felt that's how his uncle "would want it". Eventually, he got it done.

His long-term project was complete, Midnight now gloats like the "proud" nephew that he is. He also shares that there's wasn't a better way to honor his uncle, his life and the influence he's had on him."...now Uncle Filip can shred for all eternity," he adds triumphantly. While we admit the tale was a touch too macabre, it certainly turned to be a story not many of us could expect. Apart from offering up the tale to the world, Midnight even went on to show pictures to MetalSucks on how his DIY project went about and how he put the instrument together. He even included a picture of Filip from 1995 in which he's seen donning a Moonspell T-shirt and playing a guitar.

You can also see and hear how the metalhead's guitar has turned out in the video where he plays Darkthrone’s "Transilvanian Hunger", and all see the start-to-finish pictures from the project. So far, the one-day old video has over 11k views and dozens of comments stating Midnight is a metalhead beyond compare. A user by the name Oscar Lohr commented: "Everyone else in the metal community is a tryhard now." Donnie Dixon joked: "He bouta summon demons with that guitar."