Jonathon Pisani, 45, and Kate Jackson, 40, had sex on the pavement of a shopping district in the UK while shoppers and people were all around. 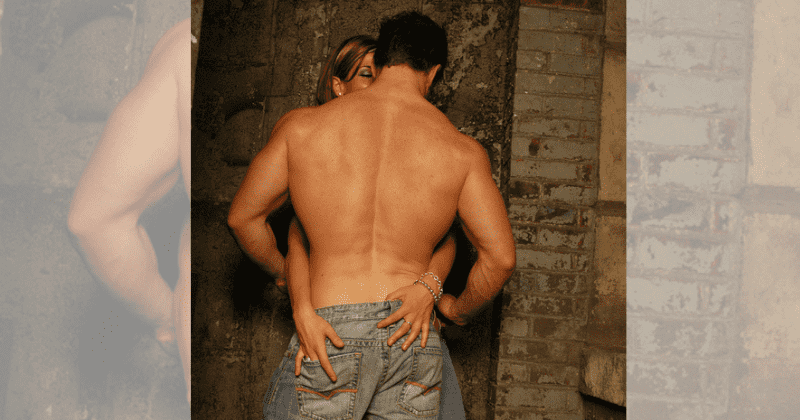 Content Warning: The story has details of public indecency that readers may find disturbing

A 45-year-old man in the UK has been jailed for 11 weeks for public indecency after he had sex with a woman on a pavement outside a bar. The woman, on the other hand, was let go with just a $66 fine. Jonathon Pisani, 45, and Kate Jackson, 40, were heavily intoxicated and had just met on August 10, the day of the incident. It didn't take long for them to throw all caution to the wind, much to the shock of shoppers and passersby in Stalybridge, Greater Manchester. They got chatting while waiting for their trains in the area. CCTV footage showed them sharing passionate kisses and cuddling with each other, before Jackson pulls Pisani on top of her and they begin having sex. One onlooker mistakingly thought the woman was being raped and promptly called the cops. The two were arrested at the scene, reports Daily Mail.

Strangers (meant to be) on a Train: Father-of-one, 45, who had al fresco sex with woman, 40, while they waited for delayed rail service is jailed for 11 weeks - despite her getting £50 fine @MailOnline https://t.co/PWXpNVJWGK

Pisani was sentenced by a Manchester magistrates court. He was fined over $200 along with the jail time. Even though Jackson pleaded guilty for the same offense of public decency in October, she escaped only with a small fine and a 12-month community service sentence. She was sentenced at the Tameside magistrate court. On the day of the incident, Jackson had been out to collect her pet dog. "Police received a call a 999 call from a member of the public and they believed that there was a female being raped on the floor in the road or on the pavement at a junction on Market Street in Stalybridge. It was 15.43pm so in broad daylight in Stalybridge town center," said Prosecutor Gareth Hughes.

The man is imprisoned. The woman is merely fined. Was her behaviour then somehow less offensive to public decency?

He added, "Members of the public can be seen in the vicinity walking past whilst this is going on and it is seen by numerous people at what was a fairly busy time of the day. Police officers attended and arrested the pair. They were interviewed and no comment was made in interview from both parties. Both accept it and have pleaded guilty." Pisani, a father of one, has been convicted before for other offenses, for which he failed to meet court dates. Ian Ridgway, Pisani's lawyer said, "His co-accused received a community order. He is currently living at his daughter's house in Oldham with the thought that he would be there for some time. If you are not willing to impose a community order then I ask for any sentence to be suspended." He also revealed Pisani has mental health problems for which he is taking treatment.

The man who had afternoon sex with a woman on the pavement of a busy town centre while the public 'went about their daily business'https://t.co/s9TfXU2YN3

He said, "He is living with his daughter and has his benefits paid to his daughter's account. He has been in contact with the probation service and has been working positively with them to get his life back on track." But Judge Bernard Begley who presided over Pisani's case said, "This was an appalling offense committed in broad daylight in the middle of the summer. You have previous convictions, albeit not for anything like this, and were subject to a conditional discharge. It may well be that the woman in this case was dealt with in a particular way, but only immediate custody can be imposed in your case." At a previous hearing for Jackon's offense, the court heard she was "highly embarrassed" by the incident according to a Metro report. "She's embarrassed by what's going on in literally in broad daylight and the implications are clear," said her lawyer, Christopher Squibbs.

Where are the man's details and his pictures? Why are you plastering the face, location and medical details of a vulnerable woman running from an abusive ex all over social media? Surely it was two people having sex? Totally misogynistic article.

He added she also had mental health issues. "On that particular day, she had fled her ex-partner's address as a result of ongoing problems. She had a dog in Ashton and was trying to get a train back. The trains were not running from Ashton so she found her way to Stalybridge and was told there was going to be a delay for a train. She was waiting outside and then struck up a conversation with a male and after being offered White Storm cider, her recollection then becomes particularly hazy. She has medication for bipolar and personality disorder and taking particularly strong alcohol is likely to have led to this situation happening and it’s highly embarrassing for her."