Their story was shared on social media by a cabin crew member on the same flight. 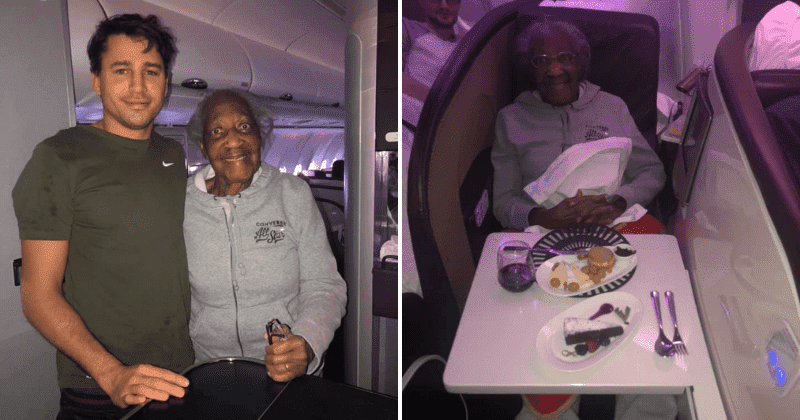 A simple act of kindness can make anyone's day. An 88-year-old who was traveling back to London after seeing her daughter in New York got an unexpected surprise when a man from first class offered her his seat. The woman, named Violet, was a nurse and had always dreamed of traveling first class when a man named Jack came out of the blue to fulfill her wish. A flight attendant shared the story on her Facebook page, which soon went viral. "Of the hundreds of flights I’ve operated, I’ve had the pleasure of looking after footballers, supermodels and some Hollywood movie stars but let me tell you about my two favorite passengers EVER! Jack and Violet (I wish she was called Vera or Rose )," wrote Leah Amy, who shared pictures of the woman and the kind man.

She explained, "Jack and his family purchased seats In our upper-class cabin for a flight home from New York, but when he got onboard, Jack went and found violet in economy and swapped seats with her." While Jack may have been from a moneyed background, he didn't complain about his economy class seat. Amy wrote, "He then sat on the row of seats directly next to the economy toilets and never made a peep or asked for anything the rest of the flight. No fuss, no attention, literally did it out of the kindness of his own heart, no one asked him to. (sic)" Violet had worked in the UK and US and would often visit her daughter who lived in New York. However, a knee replacement procedure had prevented her from doing this for a while. She was seeing her daughter after a long time.

"Her dream has always been to sit at the front, and Jack made that come true. You should have seen her face, when I tucked her in her bed after supper. She said her daughter won’t believe her, and wanted a ‘selfie’ to prove it, but didn’t have a phone or an email address," Amy wrote. While it is not known who the man was, a report in the Huffington Post revealed he was a 29-year-old from Stirling in Scotland and was traveling on a Virgin Atlantic flight. He was returning from a family trip and flying back home after attending his brother's charity event raising awareness of homelessness. Selflessness and generosity sure run in the family. Amy's post was shared liked, commented and shared thousands of times with many expressing how happy and warm it made them feel.

Michele Williams wrote: Such a heartwarming story! There r still a lot of good n considerate people in the world today. There should b more people like this instead of going at each others throats. Thabo G Maduwane commented: Kindness is the best form of Love.I applaud Jack for showing Mama(Mother)Violet Love,I'm filled with great pleasure to see that there's still young people who treat elders with Respect (sic). Another commentator named Maria Hostetler Giacalone stated: Fantastic! The feeling of having done this is far better than the feeling of sitting in First Class, I’m sure, and lasts a lot longer. Some, like Bethany Rishell, took it as an opportunity to find their next date. She wrote: Jack, you are the kind of guy with the best kind of love: agape love   And you're also the kind of guy with the best face: hot