Man Wears Nazi Swastika Mask To Supermarket, Says It's His "First Amendment" Right To Wear It

He was offered another mask by the store owner and had initially agreed to it, but later he changed his mind 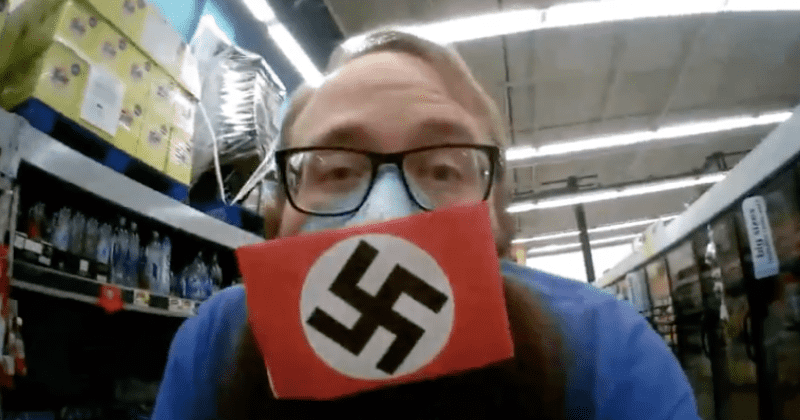 A shopper at Food 4 Less in Santee was confronted by deputies for wearing a swastika face mask. According to The Times of San Diego, as per Huffington Post, Dustin Hart uploaded a video and posted it to BitChute, a right-wing video platform. The video was that of his confrontation with a store clerk and a pair of deputies. He claimed it was his "First Amendment" right to wear the mask. But one of the deputies pointed out that he was in a "family-friendly" private store that "can make their own rules." The officer added, "They don’t want people seeing that. It’s offensive to people. …If you want to do that outside, it’s perfectly fine. In a private store, they can make their own rules." Hart declined to give his address and ID, finally saying, "I don’t want to answer any more questions.” When a store clerk asked him to remove the mask earlier because it was “basically a hate crime,” he refused.

what did he honestly think was going to happen?
Its a hate group!

Dustin appeared to be with his wife, who was wearing a black T-shirt with the “honkler” clown version of Pepe the Frog, a white nationalist meme. "The Sheriff's Department does not condone hate or acts of intolerance. We are a county that is welcoming of people from all backgrounds," the SDSO said. When they arrived, they asked the man to remove his face covering and he complied, reports NBC 7. The man behind the mask claims the community is misreading the message he's sending. "It was 100 percent intended to be a peaceful protest," he said. "The only Nazi thing was trying to say is the governor is acting like one up on his podium gloating his power the only and taunting his power." The man said he was told not to return to the store wearing the same mask.

"We were peacefully protesting all the crazy lockdown rules that have been and are continuing to be enforced here in San Diego, California," says a video description, according to Times of San Diego. "These crazy rules are destroying any quality of life we had left. Now we are unemployed and literally have nothing better to do and nowhere else we are allowed to be." Hart says in the video, "We have a Nazi for a governor. Now you guys are here, literally proving my point."

The 32-year-old longtime Santee resident said that he was making a peaceful protest and not causing a problem. "I’m just standing here doing my shopping," he told a store employee. "Not [causing] any issues." Hart offered to remove the mask at one point in the video, saying, "if you don’t like it." The clerk — who he says he’s known for a long time — offers him another one. "Go for it, man," said Hart. "I’ll take it off when I’m checking out." But then Hart has a change of heart and said that he’s not taking it off. "It’s my First Amendment right," he claimed. "There’s no sign that says I can’t decorate my mask the way I want. This is America — the land of the free." The confrontation ended without an arrest. "I would just like to go back to work," Hart told the deputies. "All I get to do is sit home and fester. I want to get out of my house and go to work and be productive."

A man grocery shopping with a KKK hood in Santee, California. The city of Santee has a history of racism & people in southern California call it 'Klantee'. This is Trump's America. pic.twitter.com/AYRdnMVnXK

Santee has been prone to racist activity for so long that the San Diego suburb of some 55,000 people gave the nickname "Klantee" and "Santucky." Just last week, photos of a shopper wearing a Ku Klux Klan hood as a face covering in a Vons supermarket sent shockwaves through the San Diego community. Police are continuing to investigate, and will "pursue any appropriate charges" in that instance, said a statement. San Diego County Supervisor Dianne Jacob said that such "sad, vile acts like this must not be tolerated here or anywhere else. It’s deeply offensive to the community and our entire region."

I've lived in San Diego 29yrs. Grew up in la mesa which is near santee. I've been there about 8 time in my life cuz everyone knows how racist Santee is. Do more to kick racist ppl out stop coexisting w/ them. Doing nothing about it is just as bad as supporting