Video Footage Claims To Show An "Apparition Walking" In The Clouds, People Call It "God"

Solo Dolo, the person filming the scene says: "Look at that hole right in the sky... that's who's got the power. He got us covered at least, we're alright" 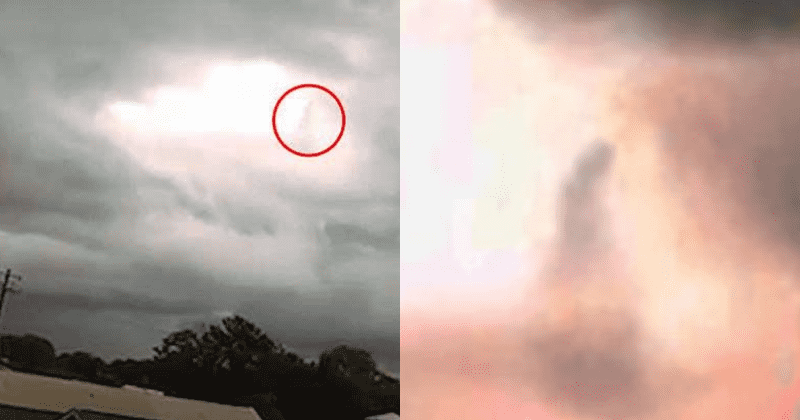 Depending on who you ask, you'll always get one of three answers when you ask a person if there is a "God" - 'Yes', 'No', and 'Maybe'. If you asked the very same question to this group of people on a Facebook Live footage, they'll all tell you they saw "God" walk through the sky between clouds. The footage we're talking about is of a storm gathering steam over Tuscaloosa, Alabama, where the camera is aimed at the sky. According to The Sun, Solo Dolo, the person filming the scene can be heard saying: "Hey, we've got a storm over here. We got no power, everything blowing over here, boxes trees."

As the amateur videographer keeps filming, he pans towards a bright white patch on the sky and says: "Look at that hole right in the sky... that's who's got the power." Moments later, the voice in the backdrop adds: "He got us covered at least, we're alright." At first glance, there's nothing to be made of the video but people watching recognized an unexplainable shape within the storm that resembled a human body in the clouds, piquing their interest. And it's this "apparition" that is being identified as God. Other viewers, meanwhile, pointed out that the shadowy figure has arms and legs and even walks between the patches in the clouds.

Replying to someone below the video, the OP then wrote: "Can't tell me my God ain't real! Thank you, God for using Lisa StandAlone Baker to reveal this to me. To see this is to believe this." Although the video is no longer available, it amassed over a million views on the social media channel and even received over 7,000 comments since the time it was uploaded two years ago. Commenting on a Youtube video of the same, a user by the name Nashameah, who appeared to see the apparition in the sky wrote: "I saw a man walking in the clouds when me and my mom was walking and I started crying it was so beautiful but no one believed me when I told them." Other people offered their own interpretations of the scene and said: "There are clearly 2 maybe more very large humanoid figures walking in the clouds. These figures from that distance could be a mile or taller! Amazing!"

Seeing human-like shapes in the clouds is not an uncommon phenomenon and likening it to god is a very subjective way of looking at things. In February this year, a British man named Lee Howdle was out hiking in Peak District National Park in Derbyshire, England, when he witnessed a breath-taking misty shadow, which looked like a person standing with their arms open with a halo around their head. Howdle, an avid photographer, decided to click a picture of what he witnessed with his Canon 5D Mk4 before committing the scenery to his memory. “My shadow looked huge. It was in this circular rainbow,” he told the news agency SWNS. “I took some photos of it and carried on walking. It was like an angel in the sky over the hills, it was quite magical."

This 'angel in the sky' has a name, which according to EarthSky, is a phenomenon known as a "mountain specter" or "brocken specter", and is featured in the UK's Met Office's  "Top Ten Spookiest Weather Conditions" list. Here's a quote from the agency's official blog which explains what the phenomenon is all about: "This effect is produced when an observer stands above the upper surface of a cloud – on a mountain or high ground – with the sun behind them. When they view their shadow the light is reflected back in such a way that a spooky circular ‘glory’ appears around the point directly opposite the sun."