Man Loses Half His Skull In Horrific Attack; Yet, Attacker Serves Only 72 Days In Jail

Steven Augustine was on his way home from work when he was attacked by Charles L Miles. His lawyer claims that her client only punched him on the face and that the injuries were caused by a backward fall. Doctors believe that he was struck by a baseball bat. 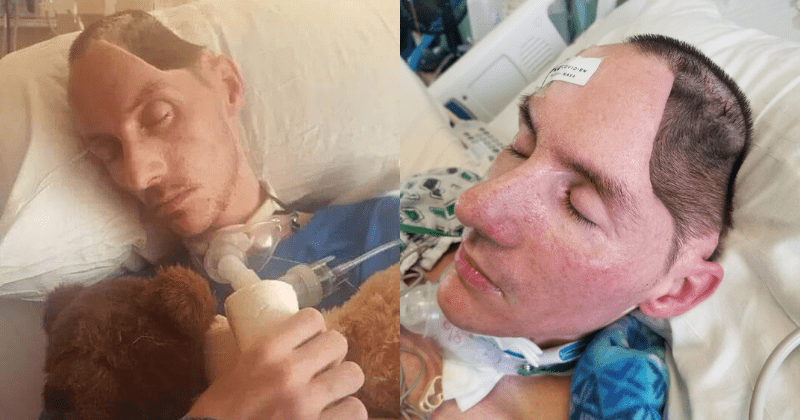 A father-of-two in New York was brutally attacked last year and has been left fighting for his life ever since. He was walking home from work when he was attacked resulting in a serious head injury that left him paralyzed. One look at Steven Augustine, 32, and you can clearly see the aftermath of the horrific injury as half of his skull is missing. Doctors believe that a baseball bat was used, and had to remove the left side of his skull that was shattered as a result of the attack. In medical terms, Augustine's injury is also known as sunken brain syndrome, a rare complication after a large craniectomy reports the Metro.

While Augustine cannot recall details of the attack, the doctors at the hospital treating him are convinced that his injuries are consistent with those hit by a baseball bat. Shockingly, Augustine's perpetrator has been let off lightly.  Charles L Miles was merely charged with a misdemeanor and sentenced to a year in prison.  Yet, he only served 72 days of his sentence at Ulster County Jail. His lawyers argued that Miles punched Steven just once and that his brain injury was caused when he fell backward. Holley Carnright, Ulster County District Attorney claimed her client had no intention to cause any serious harm, thus no felony assault charge could be brought against him.

"Steven Augustine, 32, from New York, has been fighting for his life in an induced coma since May 28, after being beaten with a baseball bat" ...but nowhere can I see where it says that the attack was in 2018 and he's been in the coma a year and a half.

Carnright said, "The injuries to his face were consistent with a single punch. The skull fracture was consistent with a fall backward."  Augustine’s mother, Donna, vehemently disagrees and wants justice to be served.  She said, "Steven's hospital records clearly state his injuries are caused by blunt force trauma possibly with a baseball bat and the man who did it is now walking free. The damage that has been done could not have happened after one punch. The left side of head shattered along with multiple skull fractures throughout his head and face and he has had bleeding on the brain."

She added, "Charles L. Miles was given a light sentence and I want justice for my son who is fighting every single day for his life. I am heartbroken, my son is in a vegetated state. Our whole family has been destroyed; we will never be the same again. Augustine is a twin and his brother Brian is distraught. They did everything together and now his brother is fighting for his life. Augustine's family is also trying to raise money for a surgery with which a metal 'skull' could be built around the damaged skull to protect his brain.  Earlier attempts by medics to replace the bone with a steel plate had been made but it became infected on two occasions.

His mother added, "The surgery he needs could save his life, it will equal out the fluid around his brain and protect it – a slight bump to the area as it is now could be life-threatening as it’s just skin-protecting his brain. My boy is fighting every day; he wakes up every time I walk in the room and he can blink to say yes and no." In addition, he also suffers from seizures.  His liver is also getting damaged from the medicines to prevent the same. A GoFundMe page has also been started to collect money for Augustine.