His own childhood made him aware of the importance of keeping siblings together. 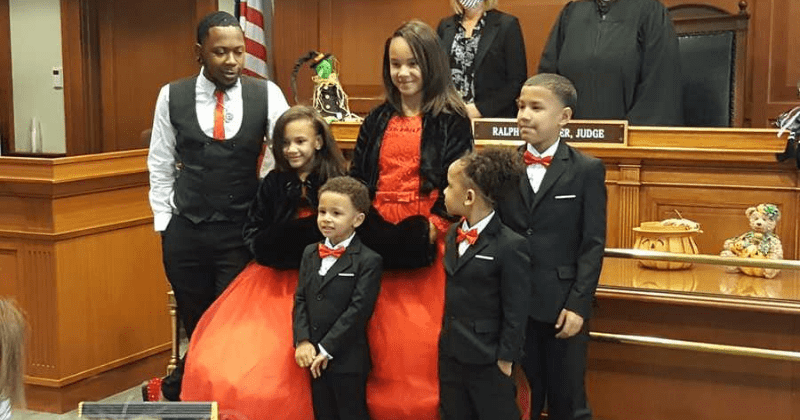 Growing up in foster care is a difficult ordeal for many kids, more so if they are siblings who have been separated. But for these siblings, it wasn't the case as Robert Carter, a single foster dad officially adopted all of them. On Friday, the Ohio resident became a father to Marionna, Makayla, Robert, Giovanni, and Kiontae all because he didn't want the kids to be separated, reports WISN. There's another special reason behind Carter's beautiful move: he has experienced first hand what it feels like to be removed from a biological home and being separated from siblings. Carter grew up in foster care in Hamilton County, Ohio, when he was 12 and was robbed of the opportunity to see his younger siblings for years.

Robert Carter grew up in foster care and was separated from his siblings for years. So when he learned the three brothers he was fostering had two sisters, he decided to adopt all five so they could stay together.​ https://t.co/b7BstOOiOy

When he was old enough to be emancipated, he was granted custody of his younger sister and guardianship of his younger brother whom he raised singlehandedly. One theme has remained back then and right now, is he makes sure to keep families together. Explaining the situation involving the children, Adoption Worker Stacey Barton told the outlet: "When permanent custody was awarded to JFS, the five siblings were already placed in three different foster homes. Mr. Carter was the only foster parent willing and able to adopt all of the children. His childhood background has made him aware of the importance of keeping siblings together. He says that he enjoys being their father and that parenting them is easier than he could have ever imagined! His life is busy, with a lot of love, laughter, and loudness! I have enjoyed working with him and witnessing the children bond as siblings."

They are such a beautiful family. That man is the very definition of love. 💕

Carter was already fostering the three boys when he got the two girls' foster moms to come together in order to orchestrate a moment where the kids could see each other for the first time in over six months. Narrating the incident, he said: "I understand how they feel. I understand what they went through, so it really touched me. I was already thinking about adopting all of the kids but when I saw them crying, I was like, 'Ok, I’m going to take all five to keep them together.'" His decision to adopt the children was borne by his experience of taking care of his siblings and being involved in mentoring and volunteering at South Avondale Elementary.

My gosh, I am amazed everyday with the caring and love of people.
It renews my hope and strength.

Sharing what he wants to teach the kids, he said: "Making memories to replace a lot of the bad ones. Every night I talk to them and let them know, ‘I’m your dad forever. I know what it’s like and I’m always here for you.'" Things haven't always been easy for him since the adoption, however, as the children are still warming up to him. He adds an instance of a touching moment he shared with one of the girls recently. "Like Marionna. She’s warmed up so much since the beginning. At first, she didn’t like me. She walked in[to] my room last night and said, 'I just want to say thanks for taking us in and taking care of us when our real mom couldn’t.' It just really touched me. So just making memories, letting them know I’m here and they never have to go. I’m here for them no matter what."

Am so happy fir this beautiful family!!❤️😍🥰😇

Hamilton County has so far experienced a record number of adoptions in the last two years with as many as 259 children adopted in 2019. This is a surge of 25% compared to the previous year. Social media denizens were both thankful and appreciative of the huge heart Carter showed by taking in the kids in and caring for them. Lisa wrote: "Thank you for having the heart full of love to give to these children. You are a true blessing." Jennrags added: "Angel on earth. May God Bless you and your precious family."

God bless this man and these kids 😇